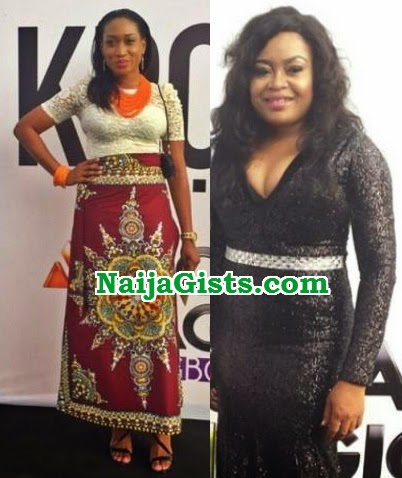 May 9, 2015 – Drama In Enugu As Oge Okoye & Nkiru Sylvanus Met Face To Face & Snubbed Each Other During Africa Magic Igbo Launch

Few days ago during Africa Magic Igbo celebration in Enugu, the duo performed a short drama in the presence of their colleagues.

Reliable Nollywood insiders at the event said it look as if they didn’t expect to see each other as one apparently destroyed the mood of the other.

To cut the long story short, fillers said Oge Okoye was in a happy mood and gisting along side Eucharia Anunobi when Nkiru suddenly walked in.

Nkiru reportedly approached her colleagues and greeted all of them with a bright smile one by one except Oge Okoye.

Unmoved by her unkind gesture, Oge Okoye was said to have kept a straight face and behaved as if Nkiru was a nobody.

Moments later, seeing her perceived enemy was part of the guests at the event, Nkiru reportedly laughed out loud even at jokes that were not funny.

In a desperate bid to make Oge Okoye more jealous, she confidently moved from one side of the room to the other showing off her glittery black gown with an attitude.

Oge Okoye who behaved more mature at the event kept her cool and stayed on the same spot throughout the event unlike Nkiru who sources accused of roaming about like a wandering child.