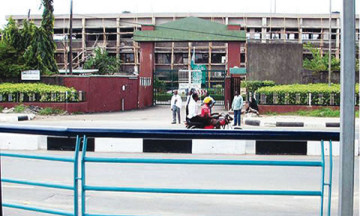 Doctors at the Federal Neuro-Psychiatric Hospital, Yaba, have cried out over recurrent attacks from mentally challenged patients at the hospital.

The psychiatrists, who are on strike to protest issues of insecurity at the federal hospital, told our correspondent that many of their colleagues had suffered severe injuries due to violent attacks from their patients.

The President, Association of Resident Doctors of the hospital, Dr. Jeje Oyetayo, said that doctors had to embark on an indefinite strike after the last attack on two female doctors at the outpatient unit of the hospital in June.

She said, “Patients have attacked doctors severally at the hospital and we don’t have trained security personnel to address this. But the last one was on the 5th of June, two female doctors were attacked such that consultants had to come and save them.

“The patient took an iron rod and started running around with it and there were no security officials. Patients get violent occasionally but the norm is that there should be trained personnel that can disarm them.

“I mean they should hold their hands and subdue them. But if there are no trained security personnel, the patient and the doctor can be injured in the process of trying to douse the violent situation and it may escalate.”

She said, “There are no escape routes for health workers in case of an emergency such as when we have an aggressive patient which could lead to harm to doctors, patients and relatives.

“There is no functioning alarm system to alert security officials for help in case of an emergency and even the consultants have refused to run clinics due to the security challenges.

“The Federal Ministry of Health needs to step in to avoid loss of lives as well as bodily harm to health workers as well as patients and their relatives,”

Another resident doctor at the hospital who spoke on condition of anonymity on Wednesday also complained that they had to consult for their patients in an unconducive environment, a situation, he said could encourage attacks from patients.

He said, “The chairs and tables in the consulting rooms are rickety. Patients have to stand over doctors and we know the danger of a psychiatric patient towering over anyone.

“Many times, we have six doctors consulting for patients in a room structured for just one doctor and the patient. Many terrible things happen under these circumstances.”

Our correspondent who went round the hospital on Wednesday observed that skeletal services were being offered.

The emergency and outpatient units which used to be filled with patients were almost empty as very few personnel were on ground.

The Medical Director of the hospital, Dr. Rahman Lawal, admitted that the hospital was presently experiencing a shortage of security personnel due to lapses in logistics.

Lawal, however, said that the attack on the doctors in June was due the fact that health workers who should have catered to patients at the emergency unit were on strike.

He said, “ We have been outsourcing security needs for some time now and we are having problems with the payment of our outsourced staff including security personnel. Some leave without telling us they are going and it takes time to replace them.”