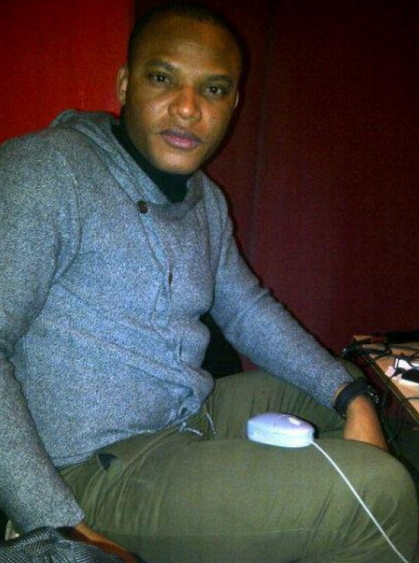 Nov 18, 2015 – Radio Biafra Founder Mazi Nnamdi’s Trial: Drama In Court As 2 Lawyers Fight Over Who To Represent Him

A dirty fight broke out today at Wuse Zone 2 Magistrates’ Court as two lawyers, Gabriel Egbule and Vincent Obetta, battle over who would represent ,Nnamdi Kanu, the Director of Radio Biafra.

Kanu is standing trial on a three-count charge of criminal conspiracy, intimidation and belonging to unlawful society which he pleaded not guilty.

At the resumed hearing of the case, Egbule who represented the accused when he was arraigned announced appearance for Kanu.

But Obetta, an Enugu-based legal practitioner, also announced appearance on behalf of the accused.

Egbule tendered a letter from Kanu’s wife to represent him in court, but Obetta told the court that he received a consent letter from kanu’s father and the indigenous people of Biafra to represent Kanu.

Obetta also said that it was as a result of his inability to appear at the arraignment that Egbule was briefed to appear in the matter.
Prosecution Counsel Moses Idakwo informed the court that the accused was not in court.

Idakwo said their inability to bring the accused was as a result of the application challenging the jurisdiction of the court to try the matter.

In his ruling, Chief Magistrate Shuaibu Ahmed, said in a criminal trial it was binding on the prosecution to bring the accused to court as require by law.

Ahmed adjourned the case till Nov. 23 to enable prosecution produce the accused and for Kanu to choose his legal representative among the battling lawyers.

Continue Reading
You may also like...
Related Topics:kanu, mazi, nnamdi