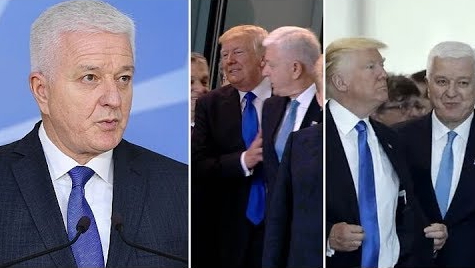 May 27, 2017 – Drama King Donald Trump Caught On Video Pushing Montenegro PM Dusko Markovic Aside To Get In Front Of NATO Leaders For Photo

One of the reigning Drama Kings in the world, Oga Donald Trump showed the kid in him two days ago in front of NATO leaders in Brussels.

In the video you are about to watch, The King of Drama himself is seen pushing Montenegro PM out of his way in order to get to the front of all the NATO leader for a photo op.

Even after pushing PM Dusko Markovic out of the way, Trump showed no remorse for what he did and continued chatting as if nothing happened.

Watch the shocking video below:

This type of childish behaviour is typical of bullies.. It is uncalled for and should be condemned in its entirety.

Chai!!! you won’t believe this is the President of the most powerful nation on earth….. Quite shameful!!

How will he feel if someone within the group did the same to him??? This Trump wahala don tire us o..