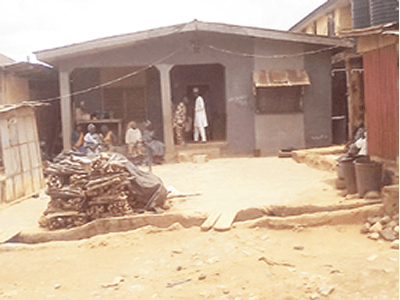 A young man identified as Ibrahim has ended his own life in Akute area of Ogun state.

According to police investigation, Ibrahim, a 32-year-old father of 6 took his own life a month after landing a driving job.

The deceased and his wife, did their laundry till around 11:30pm on Sunday, and then, yesterday morning, news went around that he had killed himself.

The incident happened at No 1 Fakeye Street. The corpse of Ibrahim was found dangling from the ceiling fan in his sitting room by the woman that used to sweep the compound.

The woman was said to have discovered the corpse when she went to ask for her money from him. When the woman opened the door and saw Ibrahim’s dangling corpse, she screamed, alerting people in the community.

It was also gathered that her screams, woke Ibrahim’s wife, who had been asleep, unaware that her husband had committed suicide. One of Ibrahim’s neighbours, who introduced herself as Bimpe, described the incident as shocking.

Bimpe said: “There was power supply. So everybody tried to utilize it. Ibrahim and his wife brought out their clothes and did a lot of washing. They finished and went into their apartment.

They joked before going to bed. It was the screams of the sweeper that alerted everyone that something was wrong. We all rushed towards the deceased’s apartment, only to see him dangling from the ceiling fan. We informed the landlord.”

A family member of the deceased, Mr. Akeem Abdulateef, said the incident was shocking, especially since Ibrahim just got a driving job last month. Abdulateef said:

“I was told his boss promised to pay him on Saturday last week, but later paid just part of the salary, promising to pay him the balance on Monday. After they finished their washing, Ibrahim allowed his wife to go to bed. He went back to the sitting room and killed himself.

As I’m speaking with you now, nobody knows why he killed himself.”

Our correspondent gathered that the landlord and the deceased’s father, who went to Ajuwon Police Station to report the incident, were detained by the police, but later released after police allegedly collected N10, 000 from them under the guise of issuing a police report.