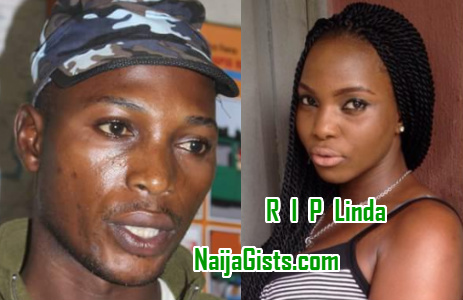 The trigger happy SARS officer who killed an innocent NYSC corper in Abuja on Wednesday night has been dismissed by the Nigeria Police Force.

Benjamin Peters has been arraigned before a court of competent jurisdiction and he is awaiting trial for killing Miss Linda Angela Igwetu.

This was disclosed in Abuja on Friday by the FCT Commissioner of Police, CP Sadiq Bello at a press briefing.

Giving details of the incident, Bello said: “On 4/07/2018 at about 0300hrs when Policemen on Stop-And-Search duty at Ceddi Plaza Pindown intercepted a Toyota Camry car with sun roof.

“It was alleged that the lady, one Angela Igwetu stood up and brought out her head through the sun roof, shouting and calling out for help that she was kidnapped.

“The Policemen claimed that they flagged that vehicle down, but the driver refused to stop. This made the Police Inspector to open fire on the vehicle which unfortunately hit the lady in question; she was rushed to Garki Hospital where she eventually died.”

On the sanction meted out to the Policeman, Bello said:

“Police have taken necessary measures, the Policeman that opened fire has been arrested, necessary disciplinary procedures have been concluded.

“He has been dismissed from the Force and arraigned before a court of competent jurisdiction and he is currently on remand awaiting commencement of trial.

“I am appealing for calm and understanding from members of the public particularly, the family of the deceased that at the end of the day justice will be done in this matter.

“The Nigeria Police, FCT Command does not condone act of irresponsibility and incivility or outright criminality on the part of its officers and men; they have always been admonished to be civil to members of the public and be professional in the conduct of their duties.”

On whether his dismissal was justified, The CP said:

“They agreed that she stuck her head up but that she was catching fun and obviously maybe they were under influence of something because they were just coming out from joint or something because she was about to pass out from NYSC the next day. That is what they said and they are colleagues; herself and one of the other occupants of the car. They work for one American company. So you see, the issue of kidnap, I don’t believe would come in there.”

“One thing again, as police officers, we know that it is much better for a criminal to escape than for an innocent person to die. So again, if you are doing that to save her life, you ended up killing her.

“So for us, I think the shooting is not justified. They could have as well radioed the control room that this is what is happening and call other Police checkpoint to be on alert.

“I can tell you that it is a standing order that it is better for a criminal to escape than for an innocent person to suffer.”

The CP also reassured residents of FCT that they should go about their lawful businesses without fear of molestation or harassment, adding that their peace and security is guaranteed at all times.”