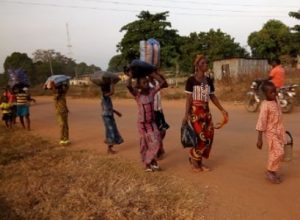 More than 20 people have been feared killed in Ugya area of Toto in Nasarawa state in a communal clash that erupted on Tuesday between the Ebira and Bassa ethnic groups.

A member of the vigilante group in the area, Yahaya Toto, said the Bassa people were seen moving out of Ugya village in large numbers on Monday without disclosing the impending attack to their Ebira neighbours.

He said: “On seeing that Bassa people were leaving the town, some of our people started to move out in panic but prevailed on them not to because no reason was offered by the Bassa people to warrant them deserting their ancestral home”.

Another vigilante leader in the area who craved anonymity alleged that the Bassa people had engaged the services of mercenaries who attacked the Ebira people in the early hours of Tuesday killing many and burning down houses.

He said the mercenaries, clad in red, stormed the rural town on over 50 motorcycles and started shooting sporadically forcing residents to flee to the bush, who were still chased after and hacked to death.

“As soon as soldiers arrived the town, the mercenaries deserted the town although one has been captured.” He added.

“We received information about the crisis this morning and our findings revealed that the situation is a spillover from the crisis in Kogi state over the weekend,” he said.