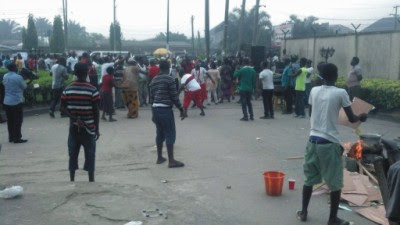 Commotion was the order of the day in Owo area of Ondo State over the weekend when two rival cult groups clashed, leaving two persons dead and several others injured.

The invasion of the town by the cultists triggered violence in major areas of the town, including Ogbonmo, Oke dogbon and Idaniken.

According to eyewitnesses, the two rival cult groups engaged in a shoot-out at Saint James Primary School located at Oke-dogbon area of the town, leading to the death of a man popularly called ‘B-malt,’ who was a dealer in shoes and assorted wares.Sources further disclosed that another man identified as Ojo Lawrence, was killed during the violent clash, with many others sustaining serious injuries.

Ojo, who was alleged to be a member of Eiye confraternity, was reportedly killed by members of a rival cult group at Idaniken area of the town.

It, however, took the intervention of the Army and Police personnel before the situation was brought under control.