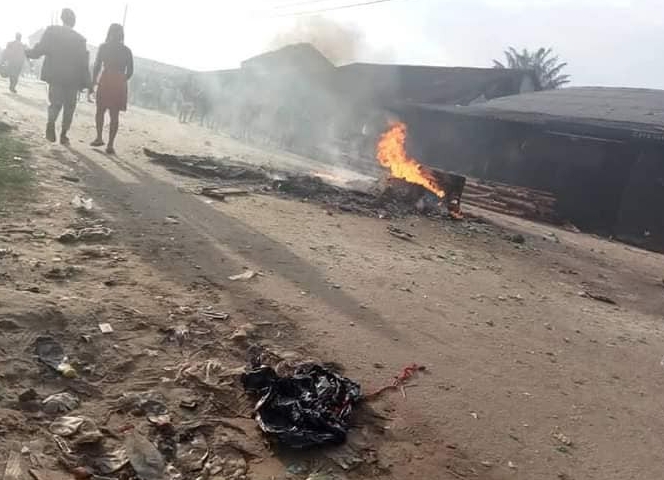 Several people were confirmed dead on Tuesday with multi million naira properties destroyed following a clash between residents of Mkpanak area of Ibeno LGA of Akwa Ibom state and some Yoruba residents.

Some sources in the area said the fight started when 2 Ilaje Fishermen and an indigene of Okoroette picked up fight following a fight over a women around 4pm.

The sources from the area said when the two men took their quarrel to the residence of an Mkpanak indigene who asked them to leave his premises.

It was gathered that when the Ilaje man allegedly felt insulted and took a bottle, broke it and stabbed the Mkpanak man (owner of the premises), the Ibeno indigenes who witnessed his action descended on him and beat him to stupor.

“The Yoruba man later mobilized members of his group and they came to attack the Mkpanak community which led to all night fight. We believe many must have died in that crisis” the source added.

Another source from Ibeno LGA who identified himself as Mr. Harrison, said:

“The incident happened in Mkpanak community between the indigenes and the Yoruba fishermen in that community..I was told that the crisis started about 4pm yesterday(Tuesday).

‘ That is not my community but as we speak some of the Yoruba people ran to my own community to take refuge and we accommodated them. I can only tell what caused the crisis which I find out from the leaders of Mkpanak. But the situation has been brought under control through the effort of the Divisional Police, Ibeno”

An indigene of Yoruba, living in Akwa Ibom state Barr. Oluwajuwon Ogunbiyi described the situation as unfortunate and called on the state government to set up a committee to investigate the crisis.

“It is quite unfortunate that this crisis has led to the loss of innocent lives and destruction of properties. The Ibeno community had been a good host over the decades. Both indigenes and non indigenes have been living there in harmony without rancour.

“I’ m therefore using this medium to appeal for peace and an end to hostilities from both warring parties. I also want to call on the Governor of Akwa Ibom State as well as Head of all security agencies in the state to intervene in the matter immediately in order to stem this waves of violence”, Ogunbiyi said.