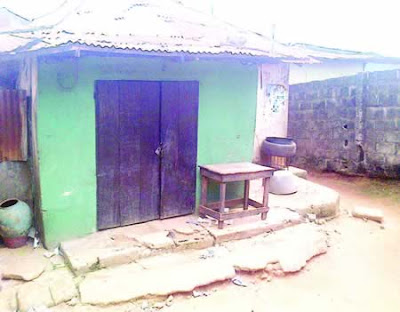 Some suspected Eiye Confraternity member killed tailor and a vulcanizer at Ikorodu area of Lagos. First, the cult members killed a father of two, Mr. Segun Showemimo, in his shop at Ikorodu. It was learnt that the incident occurred about noon on Saturday at Itunla, Lemo Compound.

The suspected cult members numbering about four, all dressed in black clothes and blue berets, stormed the area on two motorcycles and started shooting into the air to register their presence in the community. The cult members, according a witness, had earlier killed a vulcanizer.

When our correspondent visited Itunla yesterday, residents said policemen from Igbogbo Division evacuated Showemimo’s body. A witness, Mrs. Dupe Alabi, described the tailor’s killing as very unfortunate. She said: “We were all together in his shop before I went inside my room.

I was about to sleep when I heard gunshot sounds, I rushed out to pick my grandson who was crawling. It was after the dust had settled that we knew that it was the tailor they came for. “I learnt that the cult group also threatened to kill the woman they met in the shop.

We learnt that immediately the woman saw them, she tried to escape but they warned her not to move or they would kill her and her baby.” Alabi urged policemen to patrol the area regularly. According to her, the cult members entered the compound in broad daylight and killed a man without being challenged.

Showemimo’s brother, Morufu, told our correspondent after killing the victim, the cult members stoned the body. He said: “My room window is close to my late brother’s shop. What surprised me most was that after they shot him on the chest and in the head, on their way out of his shop, they brought out stones from the polythene bags they were carrying and started stoning his remains.

They also danced round the body before they left. “We were helpless. Nobody could confront them because we were not armed, but they were fully armed with locallymade pistols. What led to his killing is what I don’t understand because he was an easy going person.”

The woman, who the suspected cult members met in Showemimo’s shop, said when they entered she thought they were customers. She said: “After settling down, they told the tailor to say his last prayers, because they were going to kill him.

When they noticed I was about to go out of the shop, one of them ordered me to sit down or they would shoot me and my baby. “Before I knew what was happening, they all brought out their pistols from the polythene bags they were carrying and started shooting him in my presence.

While this was going on, I was not myself but I had no option but to comply with what they told me.” The woman said the cult members had shot a vulcanizer on Allinson Street in the morning of that fateful day before going to Itunla. She said: “The vulcanizer was tricked to inflate the tyre of their motorcycle before they shot him dead.”

N4.75Billion Fraud: Obanikoro In EFCC Detention As Investigation Continues
Nigerians Who Used Boko Haram To Apply For Asylum Status In Germany For Deportation