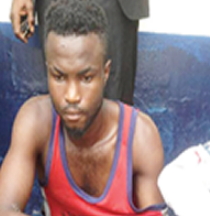 Eiye Cultist Sentenced To Death By Hanging For Murder In Osogbo

He  was arraigned in court on January 31, 2018 on an eight-count charge of murder, attempted murder, conspiracy, assault, engaging in cultism, among others.

The prosecuting counsel from the Ministry of Justice, Wuraola Ogunfolabi, told the court that the convict committed the crime on November 18, 2015 at about 8pm at Abaku area of Osogbo.

According to the prosecution, “the convict, a member of the Eiye cult group, stormed the area with his gang members and attacked some people.”

She also told the court that the convict shot Kehinde Adesina and Wale Makinde, but Adesina later died as a result of the gunshot wound, while Makinde’s finger was cut with an axe.

The presiding judge, Justice Kudirat Akano, discharged Rasaq on three-count charges out of eight preferred against him, but was convicted on other five count charges.

Justice Akano, who said the prosecutor had proved the case beyond reasonable doubt in the five-count charges, sentenced Rasaq to seven years for conspiracy, 21 years for engaging in secret cult activities and gave him a death sentence for murder.