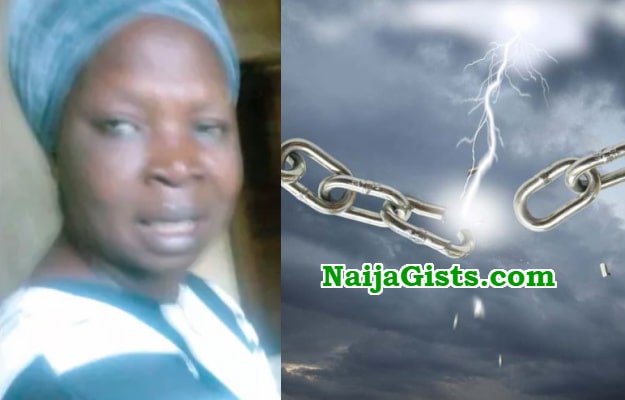 Interacting with her, one can never deduce any form of insanity or mental disorderliness. Her appearance looks decent, neat with normal human level of communication. Discussing with her at length especially when she opened her can of worms, reveals she is suffering from pressure in world of the unknown. ADEWUMI ADEMIJU writes

Debora Faleye is a health practitioner (ward maid), still in active service with a medical outfit in Ekiti State. She has children and has separated with her husband in 2009. Her ordeal according to her started sometimes in 2015.

She claimed to be seeing strange figures and hearing strange voices which she explained always disturb her at night and work. It started with a petty misunderstanding she said she had with her land lady in Ado Ekiti, whom she claimed is a wife of a popular Yoruba artiste.

Falaye explained that the situation became unbearable, when the landlady always pointed different accusations on her. The incident made her pack away and moved to another place. But when she was leaving, the land lady vowed to teach her lessons of her life.

Since then, Faleye alleged that she has been hearing strange voices that used to disturb her at home and at work. This, she said led her to constantly parking from one house to the other, within four years she has lived up to five different houses, still the strange voice goes everywhere with her. She explained that her relatives have concluded that she is mentally imbalanced, but that she knows their conclusion is far from the truth.

At a particular time, she left Ekiti state for Ogun to stay with her younger brother, but she was still experiencing hearing the strange voices. The negative development became a tsunami to her brother who advised her to go back home.

On getting back home, her elder brother took pains to take her to a psychiatric hospital for treatment, according to her, she was not admitted, but goes for treatment on appointment, to enable her go to work. She explained that she took her time to explain to the psychiatrist that she is mentally sound, but only being disturbed by the unseen strange voices.

“This is the ordeal I inherited from the house I rented in Ado Ekiti, owned by a woman who is also a ward maid in the hospital where I worked. We were living together, at a time, the woman ( landlady) accused me of keeping too much to myself, I explained to her that I have a reserved nature. Later on, we had misunderstandings based on some petty issues that could arise as a matter of living together.

“Sequel to the conflict, she vowed to teach me lessons of life, after sometimes, I left the house, but unfortunately, the house I moved to was not far from her place, meaning that we would still be seeing each other, after work,” she explained.

When she couldn’t bear it any longer, she sought for transfer to another station. Again, the strange experience occurred. According to her, it happened one day when she came back from work inside her room, where she found extremely large proportions of pepper ants, bombarded every corner of her room. She said she alerted people around, which was a Polytechnic student populated. “They came around to see the incident, to my surprise, the students started shouting that they haven’t seen such occurrence before, that students have been leaving in the area for over a long time. They said they don’t understand the kind of person I am; they said many unremarkable things to me. After a while, I got another house through a family friend, the strange experience took another turn.

“A friend (male) visited me on a weekend, I just saw some set of people in my house like crew with cameras recording my activities, I was surprised, I raised alarm to inquire what they were doing, I didn’t want any embarrassment for the visitor, I asked him to leave.

“Amazingly, on getting to work the following day, I saw some people in my office again mocking me with uncomplimentary statements about my male visitor I received at home the previous day, it went on like that.

According to her, the crucial aspect of it is that they always want her to respond and react to their statements whenever they come, but she claimed she is still able to control herself not to do so, because my response and reactions would amount to people taking her for a mad person.

“For my failure to respond, they would start shouting my name Deborah! Ole! , O sha pra pra (Deborah! thief! prostitute! unserious element!). At times, another set of people would start abusing me, foolish woman, idiot, coward, they are abusing here, and she cannot react! She couldn’t respond!”

To the attack, she said she was always able to try to control herself not to heed at all, “because how will I leave my office to go and challenge people in another section, or forcefully open the office where I’m not invited. It is just an abnormal and unfortunate situation.

With the strange activities going on around her, she said her boss advised her to visit a psychiatric hospital, where they believe nobody or group can visit or come to the health center for any activity without his consent.

“My relatives have neglected me, concluded that I am insane, my brother challenged me that is not possible for people to gather in a medical centre (where people are meant to be treated, patients are taking rest) and be disturbing someone. He said that I’m seeing strange figures and hearing unusual voices and if I disputed that, I should hold someone among those people disturbing me for people to see physically,” she said.

Falaye insisted that these strange people come to her daily raining abuses and all sorts of uncomplimentary speeches against her. She cited a day she had to leave the office late evening by 11pm. She said she saw them and was so scared that she acted in such a manner to make many people in her office concluded that she was mad!.

“The strange voices at times when I refused to react would rain abusive and unpleasant words on my children for me to be moved to reaction. I’m sad, deeply in pains. As at now, I’m being threatened with sack by my bosses. I’m tired of life, death is better than living this kind of life. I called on well meaning individuals, NGOs, psychology experts, Religious clerics, to come to my aids and deliver me from this bondage,” she pleaded.

Falaye however is still able to perform her motherly responsibilities towards her children. She said those who cater for their children more than she does are probably those that earn more than her. She said her children stayed with their father and would not like to bother them about her predicament.

When New Telegraph visited Faleye’s residence at Oke Oniyo street beside Oke Bola, in Ado Ekiti, one of her neighbours described her as an easy going, kind and hard working person but who is truly disturbed by unseen forces. “Her behaviour sometimes baffled us in the neighbourhood; it is likely she is being haunted by some strange beings which she sees alone.

She has even accused some of us before, she also alleged worshippers in a nearby church, but didn’t confront them. What we notice is that she is seeing some strange faces, hearing their voices, but she is taking people around to be those strange faces. Even the landlord child (our land lord is late) has appealed to us to tolerate her whenever she complained,” she said.

The neighbour who wouldn’t want her name in print said that aside the strange experiences, she is a lovely and peaceful neighbour to live with, “when she cooked at times, she gives my baby, she discussed and behaved normal, very neat and humane. Even at the strange occurrences, she still controls herself, its only when she narrates the experience that one can suspect something is wrong with her,” she said.

The neighbour added that Falaye even advised her on the kind of business she should do. “I sell cloth before, she is the one who advised me to be selling provision, that cloth business will not move in our area, I heeded the advice, and didn’t regret.”

In Falaye’s place of work at Ikere-Ekiti, her boss was not on seat, but New Telegraph spoke with some of her co workers (names withheld).

One of them said she has known Falaye since 2009, when she came to Ekiti from Kwara state, “she has grown up children in tertiary institutions, and she has even accommodated my sister who wanted to retake SSCE, nothing of such strange occurrence then. All these developments occurring to her are very strange, I pray that God will deliver her from the mystery,” she said.