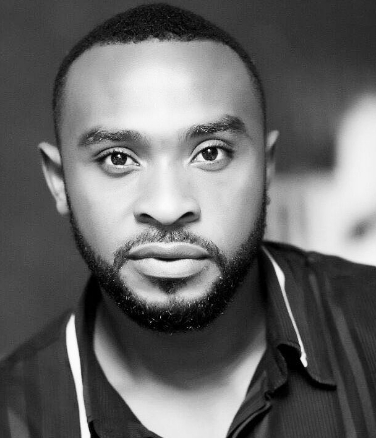 How did you feel on set for the first time?

I was overwhelmed in a sense; the feeling was nothing I have experienced again. I’ve been on bigger stage now.

Modeling helped you in the process of becoming an actor?

It led me to that in a sense; it is within the same entertainment space, within the same space of having to be on stage or walking the runway. You have to hold your own, but in this case, it felt like everyone behind the camera was monster, like they were going to bite my head off if I messed up, because the actors on set were already actors. I was thrown in to join them, and without lines, I had to make something look natural. There was no prior directing. I just did the most that I could in the moment of what felt natural to me.

From the time of your ‘accidental acting’, what did you do towards becoming the actor you are today?

I did a lot of informal training. First, I would like to say it happened for me in a way when I was discovering myself, and at that same time, I was being introduced to acting. I was morphing into becoming an actor, reading a few books here, and paying attention there, understanding the coronation between life and art, and realising that it is about the same thing.

My angle to finding it was such that I asked questions in my head, I find answers in real life and it feels right to me. I pick up an acting book by some professor of some sort or Stanislavski or any of those majors and you realise the same thing, the way I had processed it in my head is the same thing that they are writing here, and you now find that thing that gives you confidence. But for now, it’s time to acquire skills to hone what it is that you think you have found for your own consistency in performance.

Where does family come into all these despite dumping Economics for modeling and acting after graduation?

The first reaction happened with modeling when I had to go in for audition and it was a holiday period and I had to be in school because I lived in Owerri at the time and school was in Calabar, University of Calabar. So, the first thing I had to do was to cut my holiday short to go back to school. Perhaps, they are not ready for you yet and you come up with this thing ‘oh, there is a television to be won’. My dad asked me if it was something that I wanted to do and I said yes. He was like ‘okay, go do it’. From then on, they (parents) realised I was always passionate about modeling and never stopped me. They were supportive from start to finish.

Would you ascribe those privileges to being the last child?

You see that’s the thing. I have not asked myself these questions before, knowing my family; my parents are not fussy. Could it be my parents or could it be that I came through in a way that they could trust me about it? I don’t know. I won’t say it’s a peculiar case compared to my other siblings.

When would you say critically, not commercially, you had your big break?

That question is very tricky because I approach this thing in a way; from the normal way it looks from the outside. I give every project I do my all; that’s the thing. The one project that I will always point to in different ways, because it did different things to my mindset, would be ‘Black November’. Majorly because it was an international project but also me being able to hold my own around an Oscar wining actor, Kim Basinger, Grammy award nominee, Akon and Grammy award winner, Wyclef with Vivica A. Fox – all the people we grew up watching in Nigeria – and just finding myself not like a Nigerian actor in the US, but a Nigerian actor from Nigeria, to go play a role and be lead actor where you take charge of scenes with these people and hold it down without anyone putting a pin to the bubble.

You make your work sound so interesting, so out of this world, but there must be bad days for you.

Of course, there are always bad days, but my kind of bad days come from a bit more of… I have a positive outlook to life, so I don’t let that slide. I bring myself into everything I do, so it helps me see life as life is, and not think ‘oh! This is not me, that is not me’. My bad days are days when I’m on a set and nobody understands the importance of keeping the vibe good. You have some producers you are trying to help and instead of them to understand that it’s teamwork, they feel like you are overstepping your bounds, no matter how diplomatic you approach the situation, or they may not have regard for the talent process.

As a producer, what has the experience been like? Also, what’s your relationship with the people you work with?

What I try to do as producer is try to find these things, because like everything else in life, I believe we are all reflections of each other. There are certain things that are basic; you treat people nice, they will be happy. A better mind, a good mind is a better mind to work with in any capacity. So, when I see things that I would complain about in my head as a talent on a different set, and I am producing, I try to put myself in the shoes of the talent. It would be the difference between a ‘wow’ and ‘nice’ performance.

Where do you think Nollywood is headed right now?

Nollywood is doing very well. I will commend Nollywood, a lot of Nollywood’s problems are not Nollywood’s per se, it is societal problem; it is national problem. We are a reflection of the top. Nollywood is just an arm of the industry called Nigeria. When I say mediocrity, I am not attributing it to Nollywood specifically; mediocrity is embedded in the Nigerian system. Mediocrity thrives over excellence and that’s the only reason why people would opt for nepotism, nepotistic approach to appointments in government, nepotistic approach to merit and standards.

Recently, you were named News of Africa’s Most Sexy Male Nollywood Star, what does this mean to you?

As much as we are in such a vain industry, it’s validation when you are named best one thing or the other by any standard. In general sense, it is validation; it means you are something in front of others, and amongst others. So, the more of those things you accumulate the better for you.

How would you describe your fashion style?

I don’t consider myself as someone who has a particular style; I dress the way I feel. I always think about myself first, with how I look, no matter how. I owe myself just being comfortable, so I am not one to go with the trends. I mean, there are trends you can pick up but I can literally do without them. I have never had a stylist in my career.

What is that one thing in your closet that you can’t give away?

It will be a suit, black plain suit.

Of what importance is it to you?

I don’t know why it comes to mind; a black suit is safe. You can keep it and match it with anything.

Being sexy comes with a curse, how do you deal with women in the industry?

I am not out there as it might look. Social media has done a lot for us. For one, it has helped us to be out there without being out there.

What are your views on marriage?

I think it is a beautiful thing but I think that beauty has to come with an organic process. I think that’s the part where in our clime we miss in putting pressure on people. So, people are getting married for the wrong reasons now. Yes, I understand time and pressure and everything, but I think it’s a foundational problem. If we are raised to be more individualistic in our mind and understanding of who we are from the onset, from childhood; finding ourselves, our strength, living in the comfort of who we are designed to be.

Have you ever fallen in love?

Of course, love is not enough. I will say that categorically. Just like talent is not enough in this business, love is also not enough. But love is instrumental and pivotal to the success of anything, because that makes the world spin around.