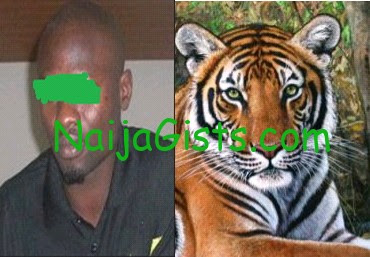 Samuel Yisa a 44-yr old civil servant asked a customary court in Lagos for a divorce from his tigress wife on Tuesday July 23rd,2012

Samuel Yisa accuses his wife of 10 years of always biting him at the slightest provocation.

He described his 33-yr old wife as animalistic and wicked

“This woman is a tigress. Even before any quarrel between us becomes heated up, she will spontaneously reach for any part of my body and bite me.

“I kept reporting to her parents with the hope that she would be cautioned but now, I want a divorce,’’ he said.

He told the court that he was once hospitalised following a deep cut on his hand as a result of her bite.

The respondent, Victoria Yisa, begged the court in tears, stating that she has become a changed wife and asked the court president to help safe her marriage from collapse

“I am no longer a fighter as I have changed sir and this act will not repeat itself,’’ she said in tears

The acting court president, Mr S.B Giwa, asked the couple to return home and settle their differences and report back to the court and adjourned the case to Oct. 23.

This is a serious case!