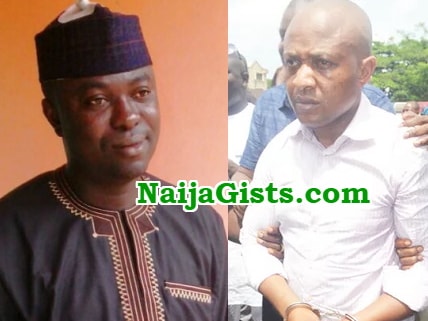 Notorious Kidnapper Chuwudumeme Onwuamadike aka Evans is now stranded as his lawyer has pulled out of the criminal and civil case.

Barrister Olukoya Ogungbeje who took up the case last year pulled out of the case today after citing personal reasons.

When pressed further, Ogungbeje said he and his team members had suffered harassment and threats from those calling for stricter punishment for the kidnap kingpin.

Here is a statement the controversial lawyer released today after withdrawing from the case:

“For the avoidance of doubt, we wish to state categorically that we have fought a good fight this far despite repeated and sustained threats to my life and my defence lawyers.

“I dare say we have no regrets whatsoever having conducted the criminal charges involving our client this far.

“For the sake of history, we have been able to enrich the basic principles of our criminal jurisprudence, especially the principle premised on ‘An accused person being presumed innocent until the contrary is proved’ no matter the public opinion and criticism”.

The kidnap kingpin who was arrested at his mansion in Magodo Lagos last year (June 10 2017 precisely) is still in the net of police.

He is doing everything possible to avert justice but his victims and those he had collected huge ransom from in the past have vowed to ensure justice is served.

Evans is expected to return to court on the 22nd of June.