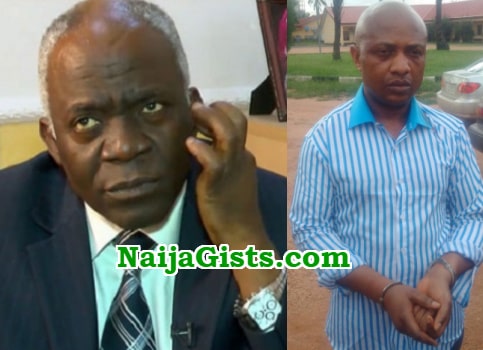 Evans told Justice Adedayo Akintoye that the event occurred in the office of the Lagos Coordinator of the Inspector-General of Police (IGP) Response Team, Mr. Phillip, a Chief Superintendent (CSP), soon after his arrest in 2017.

He alleged that the lawyer was contacted by his wife (Uchenna Precious Onwuamadike), shortly after his arrest.

Evans said the police told Falana that they had taken the suspect out for investigation, but the lawyer suspected otherwise and warned the police to prosecute rather than execute him.

Evans, in tears, made the claims while testifying in a trial within trial to determine whether his confessional statement to the police should be admitted by the court.

According to the Lagos State Government, which is prosecuting Evans on twin kidnapping, murder and attempted murder charges before the judge, the suspect’s statement was voluntarily made.

Its witness, Inspector Idowu Haruna, whose testimony preceded Evans’, told the judge that he took the suspect’s statement.

Haruna, a member of the IGP Response Team which arrested Evans, said Evans never requested for a lawyer and none of his family was present when the confessional statement was made.

He said: “The statement was recorded in an open office. He (Evans) was cautioned in English language and he narrated the story of his involvement in the kidnapping of victims.”

Haruna’s testimony was corroborated by CSP Phillip, who added:

“The defendant was brought to my office after his statement was taken. I read the statement to him and asked him if he was forced to make the statement. He (Evans) said no.”

According to him, “Evans was in a good mood when he was brought before me by Inspector Idowu. He was very okay, he looked healthy, hence I asked him questions about the confessional statement.”

But, led in evidence by his counsel, Olanrewaju Ajanaku, Evans disputed their version of events.

He accused the police of assaulting him, and, after allegedly murdering several suspects in his presence in a “Saddam Hussein” style execution, he was terrorised into signing an already prepared confessional statement he never made.

He claimed that CSP Phillip told two armed policemen to hide him inside his office toilet and to tell the SAN that he (Evans) was not around.

He told the judge that he heard the lawyer and Phillip exchange pleasantries.

According to him, Phillip told the lawyer that he had been taken out for investigation, but the SAN warned the police against summarily executing him.

Justice Akintoye adjourned till December 10 for continuation of trial.

Evans’ testimony followed the continuation of proceedings in the fourth and fifth in a series of kidnap, murder and attempted murder charges brought against him by the Lagos State Government.

In the first charge before Justice Taiwo, Evans and three others – Joseph Emeka, Ugochukwu Nwachukwu and Victor Aduba – pleaded not guilty to a five-count charge of conspiracy to kidnap, kidnapping and attempted murder.

In the second charge, Evans is being tried alongside Joseph Emeka, Linus Okpara and Victor Aduba.