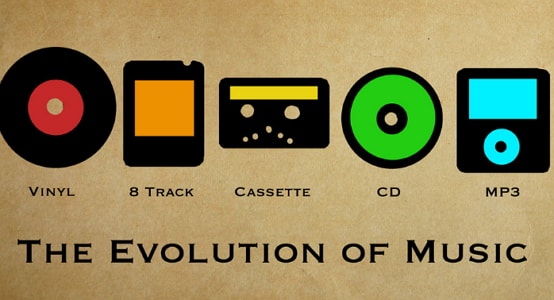 Over the past century the world has experienced an immense evolution in music. An art that has been a very important part of our lives, pleasuring us with beautiful melodies and the lyrics whose impact was felt on the soul.

Starting from the 1960’s funk music to the great pop music by the legendary Micheal Jackson, and down to the latest trend of rap music by talented musicians such as JayZ or Kanye West, music has always come to the rescue in helping us have the best time of our lives.

I am about to take you on a journey in time, telling you how music evolved over the years and what creating music felt like decades ago.
Okay, let us start with funk music. Funk music was first originated by famous 1960’s African American musician James Brown. It became popular when he adopted it as his signature brand and it received worldwide acceptance. It was a music genre different from all previous types as it emphasized the bass line.

This new genre created an environment with rhythms that allowed energetic dance and it quickly spread like wild fire, with everyone willing to groove to this new and more fun style of music.
Other musicians also adopted this new trend of music with some editing it and including more instruments to create a more spirited music type. Without doubt the invention of funk music was a turning point in the direction of evolution of music.

Rock Music is another genre of music that was widely accepted over the years. It is a genre of music that originated as Rock and Roll in the United States. Rock music has many other sub genres such as Punk Rock, Psychedelic Rock, Progressive Rock and so many others. Rock Music was famous for its use of electric guitars and intense drumming and lyrics.

It was a genre of music that was particularly known for creating a feeling of hysteria. If you’re the type that loves very energetic performances or type of music, then Rock Music is certainly for you.
Now to the golden era, the age of pop music. I know when you hear pop music the first thought that comes to your head is the legendary Micheal Jackson. This is of no surprise as he is the king if pop music .

Pop music which is sometimes called popular music is that genre of music that has taken a script from the book of every other genre and created an outstanding music style. It consist of jazz, funk, rock music and so many other forms. Pop Music has been in existence since the 1950’s but got most of its recognition in the 1980’s due to creative work by great musicians such as Micheal

Jackson, Madonna and so many others. Pop music was also boosted by establishment of music television channels like MTV.
The music genre is one that will last for a very long time as it is the perfect blend of all other genres and is appealing to even new generations.
1990’s was a time of great revelation. It was a period in which music was the greatest tool used by the minorities to express their grievances. A lot of music genres such as Hip Hop, gangsta rap, old schools music and some others recieved a lot of airplay worldwide but the one that was most prevalent was gangsta rap.

The tough lyrics and other components of this music genre made it to be source of controversy with many organisations such as the government and religious institutions condemning it because it encouraged a way of life which they regarded non acceptable.

Musicians such as Ice T and the N.W.A didn’t agree with this and they argued that gangsta rap was a reflection of the harrowing life in which they have to live through. They saw it as a weapon to speak against their oppressors and used it to gain public awareness and sympathy on a lot of issues affecting their societies. An example is “Fuck tha police” by N.W.A to show grievances against police brutality against the black community.

Now to a more recent time, the 2000’s can be defined as the age of the internet. It has allowed everyone in the world to showcase their talent in any aspect and anyone is just a video away from fame.

This period has recorded intense growth in all genres of music starting from RnB, hip hop music to even less popular genres such as Afro pop. A lot of internet sensations such a Justin Bieber, Chris Brown, Wizkid, Davido and a host of others have dominated the music scene over the years.

This period has recorded the most invention of new genres of music because every part of the world is now connected. Social media is a very active tool in the hands of creatives and the whole world is a market waiting to be tapped into.

The internet has created an environment in which not only lyricists have a very good chance at fame but also individual components can stand alone and still create an amazing fan base. Dj’s, drummers and other instrumentalist now have an opportunity to create their own unique sound and show it to the whole world.
This has by far been the best period to be an artist as the whole world is now a single stage.

There are many other intriguing genres of music such as soul, disco, jazz music and so many others that have pleased us over the years but the ones mentioned above have been the most popular.
Without doubt music is an important part of our existence and will continue to develop in diversity and technique over the next couple of years, decades and even centuries. It is an art that has managed to always evolve to please the situation whether it is meant to portray a feeling of love or to be used for an activistic purpose. Music is the weapon, music is the shield.
Music is life.

Continue Reading
You may also like...
Related Topics:evolution, music

Drama As Fleeing Kidnappers SUV Falls Into Ditch In Shasha Lagos
Global Warming: The Clock Is Ticking And Our Planet Is Weeping, It Is Time We Listen To Her Complains Before It Is Too Late