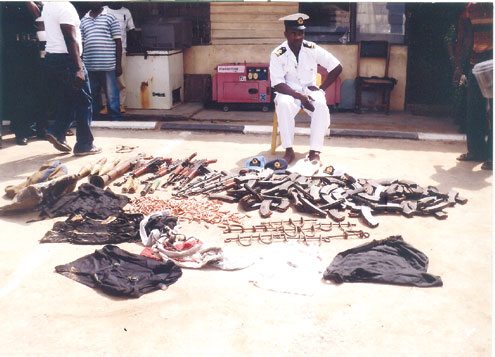 According to the PM News, a fake Naval Commodore, the equivalent of Brigadier-General in the Army, found with large cache of arms and ammunition, Godwin David has been arrested by men of the Special Anti-Robbery Squad (SARS) in Igando area of Lagos State, southwest Nigeria.

Godwin, a native of Umuahia in Abia State, was nabbed in his hideout after his gang of robbers and kidnappers who were previously arrested by SARS exposed his clandestine activities.

In his confessional statement, Godwin David disclosed that he and his gang members usually get their guns from the East where they are later moved to Lagos to be used for their robbery and kidnapping operations.

He said moving the guns and ammunition to Lagos was usually easy as he usually dress as a Naval Commodore to deceive policemen on the road.

He also confessed to using the guns and ammunition for robbing several people in Lagos and its environs.

“When we go out for the operation, we dress in naval uniforms so that no policeman or soldier on the road will suspect us. Once we get to our hit area, we pull off the uniforms and begin our operation,” he said.

Godwin also confessed that his gang has successfully kidnapped four  people who paid several million for their release.

Godwin said the hideout in Igando where he was caught, was used to keep the kidnapped victims.

Narrating how he was eventually arrested, he said: “I was in the camp when I saw my boy with a man who came on an okada. I heard a gun shot and immediately, I opened fire. Before I knew it, I was trapped down and arrested by SARS operatives led by OC SARS, SP Abba Kyari.”

Sources at SARS told P.M.NEWS that the landlord of the premises where Godwin was arrested is presently on the run and he has been declared wanted by SARS.

The source further told P.M.NEWS that the landlord is believed to be an accomplice.(Ayodeji Dedeigbo).