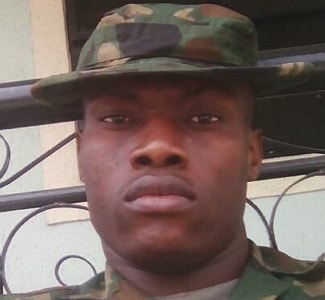 The police have arrested a naval rating, Yusuf Owolabi, for allegedly killing a woman, Taibat Badru.

The late Badru was a sibling of Mr Musbau Rasak, the Chief Press Secretary of the Lagos House of Assembly Speaker Mudashiru Obasa.

It was gathered that Owolabi stabbed Badru, 48 with a dagger on her back following a disagreement between the suspect and the woman’s son, Quadri.

Badru, our Correspondent learnt, was rushed to Alimosho General Hospital, Igando, where she passed on.

According to sources, the families of Owolabi and the deceased have been at daggers drawn for a while as a result of kingship tussle.

It was learnt that Owolabi’s father, Moshood, lost the Baale stool to a rival family, which pitched them against each other.

He was said to have arrived the village on Friday evening armed with the weapon and accompanied by a friend.

He allegedly bought some alcoholic beverages, which they drank before he set out to fight Quadri.

“It was Quadri they came for. Owolabi was attacking Quadri, who then called his mother to see what was happening. The woman rushed out in defence of his son and that was how she was stabbed from behind.

“The cut was deep and the woman bled too much. She was rushed to the hospital but she died there. Owolabi was recently transferred to Lagos from Port Harcourt.

“No one really knows what led to this current fight but maybe, the naval man heard that they always mocked his father. Both families have been fighting ever since the Baaleship tussle. The suspect’s father lost out and his supporters went berserk.

“Because of the problems, the community at a time, set Moshood’s house ablaze. So, maybe, the suspect came to avenge for his father but has ended up killing someone.”

Although policemen from Ajagbandi Division arrested him, it was gathered that the suspect was moved same day to the State Criminal Investigation and Intelligence Department (SCIID), Panti, Yaba.

Contacted, spokesman for the command, Chike Oti, a Chief Superintendent of Police (CSP) said the remains of the deceased have been deposited in the hospital’s mortuary for autopsy.

The murder exhibit has been recovered, Oti said.