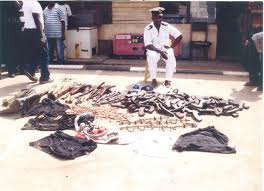 Andrew Ogwu who is posing as as lieutenant in the Nigerian Navy has been arrested in Oju LGA of Benue State. He claimed he was sent to the area to establish a Merchant Naval Training College.

According to PM news the suspect went to the area and obtained forcefully, the sum of N80, 000 each from unwary and anxious applicants seeking recruitment into the Navy.

An indigene of Oju who would not want his name mentioned told P.M.NEWSthat the fake naval officer had shown them a breakdown of how the money will be expended which indicated that N60, 000 is for fees, N10,000 for purchase of forms and another N10, 000 for accreditation.

It was further gathered that the suspect convinced the applicants in the area that he was sent from the Navy Headquarters, Abuja by his boss Commodore Benson Edema to establish the Naval Training College.

However, luck ran out on him as information got to the Navy office in Makurdi about his nefarious activities which subsequently led to his arrest and detention at the State Security Service office.

Efforts to reach the officer in charge of Nigeria Navy Provost Training School, Makurdi proved abortive but sources from the office confirmed that the suspect was a fake naval officer. They said the only recognised institution for the training of officers for seafaring is in Oron, Akwa Ibam State and the school of Oceanography, Victoria Island, Lagos.

P.M.NEWS also learnt that Commodore Edema whom Andrew claimed sent him is no longer in the service of Nigerian Navy and has even been placed on the wanted list of the Navy Headquarters, Abuja in connection with related dubious acts of operating illegal merchant schools which had been banned by the Federal Government.

The State Security Service also confirmed that the matter has been reported to the Navy for investigation, assuring that as soon as investigations are concluded, the law will take its course.

What’s going on with these impersonators. God help us oooooo