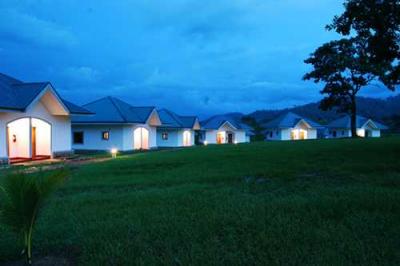 A village head in Edide in Mbube, Ogoja northern Cross River State, Chief  Raphael Oga shocked his subjects when he took his life by sticking the nozzle of his double barrel gun to his throat and pulling the trigger with his right foot. He was said to have taken the extreme action after he was accused of killing his sister through witchcraft.

According to PM sources in Edide village said the early morning shot sent the bullets right into the chief’s head which scattered his skull instantly.

“As you can see, the man was not poor because he had three wives with many children. He was also working for Mr. Joe Ewe, the former chairman of Ogoja Local Government Council as security guard and was regularly drawing salary. We don’t know what led him to do this,” Mr. Solomon Igbang told P.M.NEWSin Edide.

The chief, our source further said, woke up early that fateful morning and exchanged greetings with those in the compound and did not show any sign of sadness.

“But surprisingly, at about 7 a.m., he went back to the room and soon we heard gunshot. When we rushed into the room, we saw him bleeding from the head, almost dead,” Solomon said.

Our source said he knew the 68-year old chief well as they worked together for the former chairman of Ogoja council, and that the man was quite popular.

“We had a lot of respect for him and we all called him ‘chief’ each time he came to Ogoja for his pay and security checks on the chairman’s compound,” said Solomon.

One of the wives of the chief who prefers anonymity said the man may have committed suicide as he was upset by allegations that he was instrumental to the death of his younger sister in Lagos.

The woman is scheduled for burial on Saturday.

She said her husband was accused of killing his sister in Lagos through witchcraft, saying the allegation bordered on jealousy as her husband was more comfortable than most of the villagers.

The chief was buried on Wednesday to make room for the arrival of the corpse of his younger sister from Lagos today for wake keep and burial on Saturday.

A source at the Divisional Police Command in Ogoja said the body was released to the family on Tuesday for burial as there was nothing the police could do since the family members did not want to make any case out of the issue.

“We have released the body to the family. You can get more information from them at Edide,” a police source told our correspondent.

It was in that same village sometime in February that a headmaster shot a youth corps member who was posted to the place for the voter registration exercise. (PM news Emma Una/ Calabar)