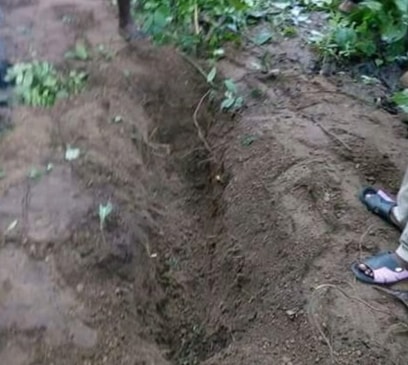 An Ado-Ekiti Magistrate Court has ordered the remand of a farmer, Toyin Ajakaiye, for alleged murder and ‘secret burial’ of a commercial motorcyclist, Omoniyi Are.

Toyin was arraigned on information from the Commissioner of Police to the court that there was a probable cause to remand the suspect in prison custody for being reasonably suspected to have committed murder.

According to the charge sheet marked MAD/133ft/2018, Toyin was alleged to have committed the crime on 22nd August at Agbado-Ekiti in Gbonyin Local Government Area.

Toyin told the court that he engaged the commercial cyclist to convey him to the farm where a fight allegedly ensued between them over disagreement on the transport fare.

The fight, according to him, was sparked by his offer to pay the deceased N100 out of the N200 charged by the cyclist. The defendant claimed that he had N100 on him.

Toyin claimed that he held the deceased by the neck as he (Omoniyi) was trying to grab his genitals adding that the deceased died in the scuffle.

The defendant confessed that when he couldn’t carry the corpse, he dug a shallow grave and tied a rope on the neck of the deceased and buried same in the grave.

Toyin said he was arrested by passersby who handed him over to the police.

But the report of the Investigating Police Officer (IPO), Lasisi Bashiru, countered the statement of the defendant.

According to the IPO, investigation revealed that the defendant tied the rope on the neck of the deceased at the scene of the crime and buried the corpse adding that Toyin had earlier been detained of a case of stealing goats.

The police prosecutor, Oriyomi Akinwale, pleaded that the court granted the request to remand the defendant in prison custody.

Defence counsel, Busuyi Ayorinde, pleaded that the duplicate case file be forwarded to the Ministry of Justice for legal advice adding that application for bail will be filed before an appropriate court.

Presiding magistrate, Mrs. Modupe Afeniforo, ordered that Toyin be remanded in prison custody and adjourned the case till 16th October.