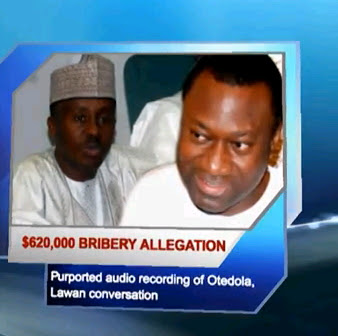 The telephone conversation  / audio recording tape involving two top Nigerian Politicians who were alleged of $620,000 in Bribery has been leaked to NaijaGists.com via Channel news.

We obtained this from Channel TV few hours ago.

This audio tape recording contains the detail conversation between the two corrupt politicians.

NaijaGists.com have also detailed the conversation in a transcript format.

From the conversation, Farouk Lawan masterminded the whole thing.

Listen to the audio recording below and read the Femi Otedola and Farouk Lawan audio tape transcript afterwards.

Farouk Lawan: It wasn’t like my brother talking. That’s one.
Secondly please this thing that were doing, keep it to yourself
otherwise you will make it difficult for us

Farouk Lawan: You will make it difficult because somebody called me  now and said that we said we are going to address it, so, so please keep it

Femi Otedola: Address what? I am now

Farouk Lawan: Yea Because if it is already out that we are going to do something. When we do it people will think that we are doing it because we had compromised. And you know that is something that err…… and if my colleagues get to hear about it, i wont be able to convince them so keep it to yourself

Farouk Lawan: Let it be….. let it not be like anybody is aware of what is happening. If anybody asked you simple explain that thing thing you know from your records. You have all the records and you have made a case to the committee. You have sent your documents to the committee

Farouk Lawan: Yea Because the moment it gets out now we are going to correct it, then it means we have already haaa.. so let it be…

Farouk Lawan: I want to spin a surprise on the floor and that is the only credible way I can do this

Farouk Lawan: So please please yeah please yea, you know our sector. You know your sector is small. Everybody knows – and people are already saying….

Farouk Lawan: Somebody just called and said what happened. Haa.
They said, femi has gotten his way around, you guys and he has already succeeded.

Femi Otedola: That is not true, but let me also tell you one thing……..

Femi Otedola: but my brother let me also tell you one thing, you know me as a person.

Femi Otedola: People just get up….

Farouk Lawan: That makes it difficult, just , just whoever… you know….
no , I didn’t do this. I’m sure it must have been a mistaken from the committee but I have sent a letter to set the record right that’s all

Nigerian Politicians are the most corrupt entity on the surface of the earth.

God have mercy on this nation ooooooooooo.