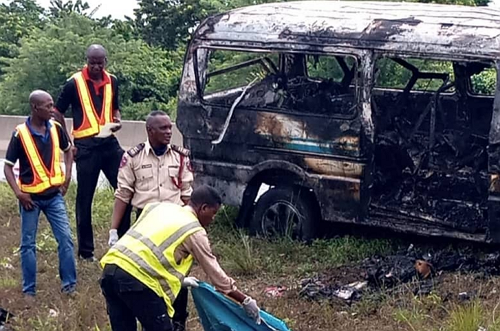 At least 5 people were today burnt to death and 10 others sustained injuries in an accident involving a white Mazda bus at Onigaari, on Lagos-Ibadan expressway.

Oladele said that the accident which occurred around 8:49 a.m was caused by speed and loss of control.

The sector commander said that the crash involved 18 passengers comprising 17 male adults and one female adult.

The FRSC boss said that 10 males sustained injuries from the crash while five of the passengers comprising of four males and one female died from the crash.

“The lone crash involved a commercial bus that traveled all the way from Sokoto state but stopped briefly in Ibadan to pick other passengers.

“The white coloured Mazda bus with registration number WWD 302 CB, was heading to Lagos before it lost control at Onigaari due to speed and collided with the road median and upturn,” he said.

Oladele said that the injured victims were taken to Olabisi Onabanjo University Teaching Hospital (OOUTH), Sagamu, while the dead bodies were deposited at the mortuary of the same hospital.

The sector commander reminded motorists of the need to drive cautiously on the Lagos – Ibadan expressway, saying the road was still undergoing rehabilitation.

Oladele said that the recommended speed at construction areas was 50 kilometers per hour. (NAN)