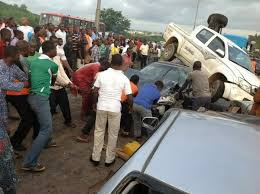 Not less than 3 people lost their lives in Kugbo area of Abuja today when a fully-loaded Pepsi trailer suffered brake failure and rammed into cars held in traffic jam on the road.

The impact of the collision reportedly killed 3 instantly while 8 others sustained serious injuries.

He added that the bodies of the deceased had been taken to Asokoro General Hospital Mortuary while two of the injured are currently receiving treatment at the same hospital.

Six other injured persons were taken to the emergency ward of the National Hospital Abuja for treatment.

Our source said the crash led to a serious traffic jam along Kugbo-Karu &  Nyanya road. Some passengers waiting for bus reportedly trekked long distance due to the traffic gridlock.

May the souls of the deceased rest in peace.