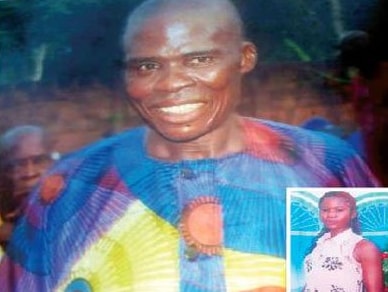 A man has been arrested for the murder of his biological daughter.

The suspect, Aguluka Cletus in the early hours of Friday the 1st of June 2018, used a machete to stab his daughter, Aguluka Oyinye to death after the deceased refused to give him a satisfactory answer in regards to his missing torch light.

The incident happened at Osikwu village in Orumba North LGA of Anambra state on Friday.

The deceased was looking forward to becoming a wife on Saturday when death struck her tragically.

The ‘father from hell’ was arrested by a vigilance group while trying to flee his village after killing his daughter.

According to the grieving mother of the deceased, Georgina, the suspect returned home from work on Thursday looking drunk .

He later asked his children for his torch light but none of them gave him a satisfactory answer.

The family went to bed only for the suspect to wake up around 1 am and stabbed Onyinye was was fast asleep to death.