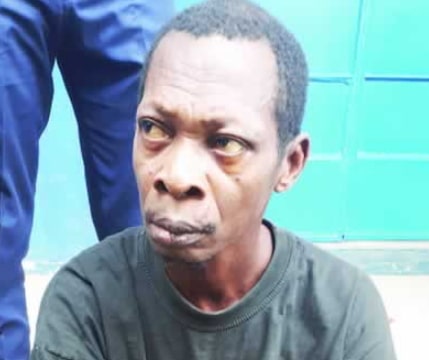 A father from hell has been nabbed by operatives of the Edo State Police Command for allegedly raping his 13-year-old daughter in the Ikpoba-Okha Local Government Area of the state.

According to Punch Metro,  the suspect, Friday Moses, was picked up by the police after a complaint by members of Okah community in the area.

Moses was alleged to have started defiling the primary six pupil at the age of seven, which continued till she became 13 years old.

A police source told PUNCH Metro that the victim did not know that she was pregnant until it became obvious to some residents.

“The girl did not even know that she was pregnant because of the constant abuse. It is a pitiable case,” the source said.

But the suspect, a commercial motorcycle rider who hailed from Cross River State, denied any connection to his daughter’s condition.

“I was told that I impregnated my daughter. Someone else owns that pregnancy; she told them (community members) that I was responsible for it.

“I never slept with her. A woman told me that she was pregnant. The following day, the community summoned me and the police arrested me. When I told the police that I was not responsible for the pregnancy, they began to beat me up.”

Moses, who was paraded on Wednesday at the police command headquarters in Asaba, also claimed that efforts to get a wife, after the death of the victim’s mother in 2013, had not been successful.

“I used to have a girlfriend, but her people quarrelled with me and told me to leave her alone because she was someone else’s wife,”.

However, the victim insisted that her father was responsible for her pregnancy and had threatened to kill her if she exposed his action.

“My father slept with me five times. He started when I was a little girl.

“He would order me to come on the bed and begin to touch my waist. When I told him to leave me alone, he said that he would severe my head with a machete.

“When I reported him to some people in the community, they beat him up.”