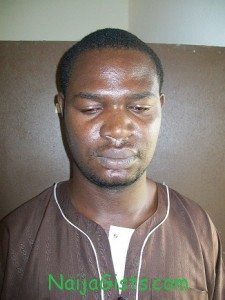 The prosecutor said Buba’s mother died a couple of years ago.
It was learnt that Umar was lured into the deal by his friend, Musa, who convinced him to sell one of his children to prospective buyers and solve the myriad of financial challenges confronting him.

Umar’s son was said to have been sold through Bitrus, living at Kwanar Huguma in Takai Local Government Area of Kano State.
After he agreed to the terms and conditions of the deal, Umar allegedly took two of his 16 children from Gombe to Kwanar Huguma in Kano State with the aim of selling one of them.

Umar said he was told that the children would be engaged in farming and get paid every day.
When asked why he decided to take two of his children instead of one, he said “the plan was that the boy would feel comfortable if he is with his brother up till the time the prospective buyers would come and take him away at night”.

According to Kankarofi, the offence runs contrary to Sections 95 and 97 of the Penal Code.
The magistrate then adjourned the case till 13 November 13 for continuation of hearing.