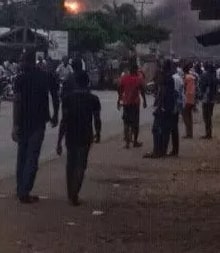 A young man identified as Eedee Tombari has been arrested by the Operatives of the Rivers State Criminal Investigation and Intelligence Department for allegedly raping a pastor’s 9-year-old daughter to death.

The 23-year-old suspect was initially arrested by detectives attached to the Bori Area Command. He was later transferred to SCIID.
According to sources, the suspect committed the crime on Monday, inside a new generation church at Lepne Street, in Bori, the headquarters of Khana Local Government Area of the state.
Sources said the mother of the victim, Eedeebari Littia Gonis-Kogbara, had taken the deceased to a church programme, and kept her in one of the rooms in the church to sleep, while the vigil was on.

Tombari was alleged to have sneaked into the room, raped her to death and later dumped the victim’s remains at the back of the church fence, after he had discovered that the girl had died.

The victim’s father, Pastor Peter Gonis-Kogbara, who is the General Overseer of a church in Bodo, told journalists that it was the traces of blood that made people to discover where the suspect dumped his daughter’s body.

He has called on Nigerians to come to his aid and ensure that justice prevails in the matter.