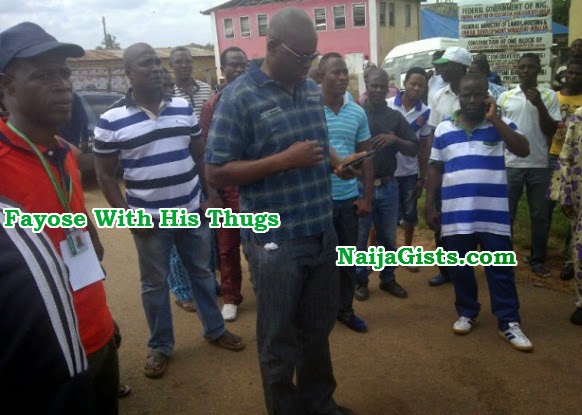 The entrance to Ekiti State House of Assembly complex in Ado Ekiti turned into a party floor yesterday after the incumbent governor ordered PDP House members to block it in order to prevent APC lawmakers from impeaching him.

Some PDP house members were spotted drinking and dancing to a music being played near the complex yesterday while a bus filled with military men blocked the entrance.

This strange move was aimed at preventing the 19 APC lawmakers from holding a sitting session to begin his impeachment proceedings.

The party loyalists were led by the Deputy Governor, Kolapo Olusola; a former Speaker, Tunji Odeyemi; the Special Assistant to the governor on Information, Lanre Ogunsuyi, and Fayose’s Public Communications and New Media aide, Lere Olayinka. 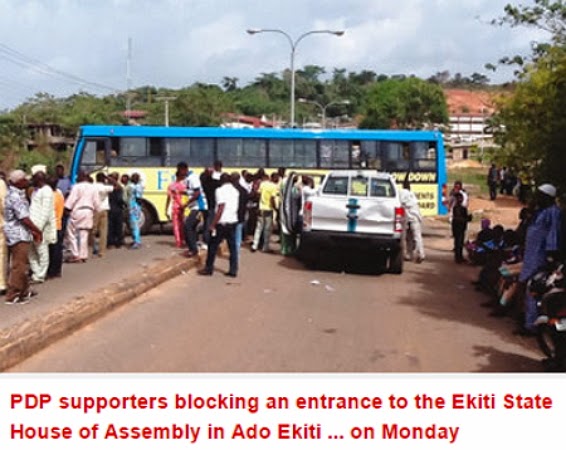 9 additional Toyota Hilux vans carrying military men and officials of the Department of State Services also blocked the main entrances to the Assembly.

The PDP members erected canopies about 200 metres away from the Assemby’s premises.

Some of them sat quietly under the canopies erected by the Secretariat Road while others danced to music supplied in front of the old complex.

Another bus was used by the PDP members to prevent movement into the Assembly premises from the same road.

The 19 APC lawmakers who had since Nov 17, 2014 stayed away from the House Proceedings over threat to their lives have served Fayose an impeachment notice.

Sources in his administration claimed that the governor has discarded the impeachment notice.

Ekiti State House of Assembly is now being controlled by PDP House Members only.