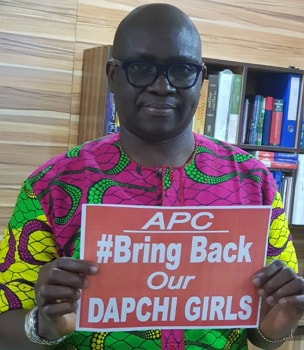 Nigeria’s most controversial governor Ayo Fayose has joined the social media campaign to help in the release of the abducted Dapchi Girls.

On Tuesday, Fayose carried the #Bring Back Dapchi Girls” placard asking the Buhari government to bring back the abducted girls.

He got an instant reply from his opponent, Babafemi Ojudu who tweeted:

”Fayose bring back the ones you murdered, Attah of Ayede, World Bank Consultant Dr Ayo Daramola, Mr Omojola of Ifaki”.

Ojudu is not the only one accusing Fayose of murder.

Several other politicians has called for investigation over suspicious deaths of Fayose’s opponents in the state.