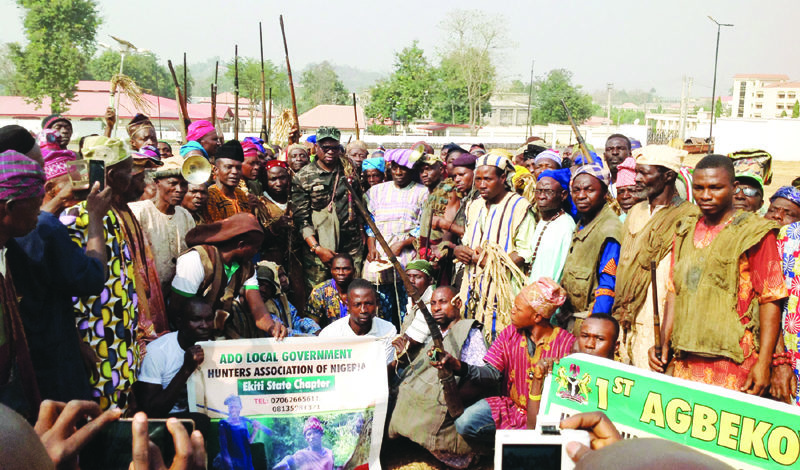 Sounding the battle cry while hosting some hunters at the Government House pavilion in Ado-Ekiti, the state capital, the governor said intelligence report available to him revealed that “Bororo” herdsmen had surreptitiously entered the state.

Fayose, who wore a camouflage shirt, a pair of trousers and a fez cap to match “to reflect the mood of the nation”, urged the hunters to go back home and defend the people.

Apart from the local hunters, other residents who showed up at the forum were the revered farmers, popularly called the Agbekoya, vigilance groups and other residents from the Tiv, Idoma and Igede ethnic groups in Benue State.

The event was highlighted by intermittent firing of gunshots, whistling and songs by the hunters.

Fayose, who sympathised with the people of Benue State, where scores have been killed by suspected herdsmen, promised not to allow his people to be slain, as done in the Northcentral state.

The governor claimed that the alleged plan to invade Ekiti was to make the state ungovernable for him ahead of the July 14 governorship election.

He said the situation in Benue and Taraba states showed that “President Buhari lacks the capacity to protect Nigerians”.

“I have received letters that the Bororos have entered our reserves; they want to violate our laws. I want to call the attention of the Federal Government that they have come and wanted to kill men, women and kids in Ekiti. We will not allow that to happen here in Ekiti.

“I want you all, our hunters, to go back today to protect your people. Be vigilant, open your eyes and make sure that everybody entering the state is screened.

“No one in the guise of grazing should enter our land after 8 p.m. For our brothers who harbour criminals, tell them Ekiti is a no-go area. If your plan is to make this state ungovernable, you are wasting your time.

“I have called this meeting for everyone to be vigilant. I will begin to support you now to secure Ekiti. Don’t let them take you by surprise; don’t allow them to take Ekiti by storm.

“Go to the farms and keep vigil; don’t just entertain visitors who come in the night. Screen them. We don’t want visitors in our reserves at 8 p.m.”

“This (camouflage) dressing is done to charge our hunters to secure the state. I saw pictures of the killings (in Benue) and I wonder if those were human beings. I asked the question if people could be that wicked to kill human beings that way. They will find no peace. It is no tribal killings, but that of mindless people.

“The blood of the departed will find those people and they won’t know peace. It is the duty of the Federal Government to protect its people. We are not protected.

“We have never had it so bad. People must come to leadership with conscience. The Federal Government should have sent the Army and not the police.

“Governor (Samuel) Ortom should fasten his belt and protect his people. Those seeking help in Abuja would not find it because Abuja also needs help. I sympathise with you (Benue) people; nobody will kill you. You are all safe here.”

He released telephone hot lines for residents to call when they notice strange movements.