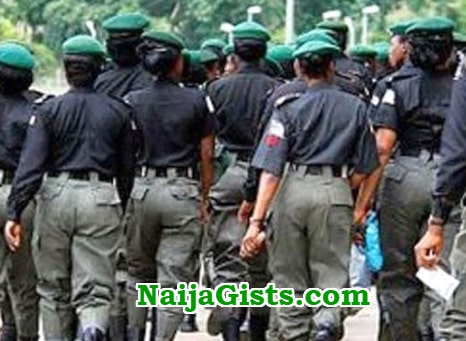 An inspector with Lagos State Police Command, simply identified as Inspector Justina, has been accused of assaulting a sergeant’s 26-year-old expectant wife, Mrs. Usuman, at the MOPOL 20 Barracks in Ikeja, Lagos.

Besides assaulting the expectant mother, the inspector serving at MOPOL 43, allegedly arrested, caused the woman to be arraigned and remanded at Kirikiri Prison for pouring hot rice on her.

This development was said to have angered junior police officers’ wives, who planned to protest the alleged abuse of power by the inspector today.

Trouble was said to have started on April 11 after the duo had a disagreement at their Block 6, Flat 3, Mopol 20 barracks home.

Inspector Justina was said to have accused the expectant mother of gossiping about her with another neighbour.

She was said to have entered Mrs. Usuman’s kitchen, pulled her hair and it led to a fight between them. The woman poured a pot of hot rice on her buttocks.

Although Mrs. Usuman’s husband was said to have reported the case at the Provost Unit of the Police Command in Ikeja following threats from the inspector, it was gathered the sergeant and his wife were detained and compelled to send people to beg the inspector.

“They sent relatives to appease the woman while they were still being detained. The mediators went with N50,000 for the inspector’s treatment. While the couple were still in detention, the Woman Assistant Superintendent of Police (ASP) investigating the case took the expectant mother to an Ogba Magistrates’ Court, Lagos, where she was arraigned and taken to Kirikiri Prisons,” a source said.

Mrs. Usuman’s detention did not go down well with her mates at the barracks, who wondered why she was charged pending the conclusion of investigation by the Provost Unit.

It was gathered that the sergeant and his wife are still being detained, while their four children are left in the care of neighbours.