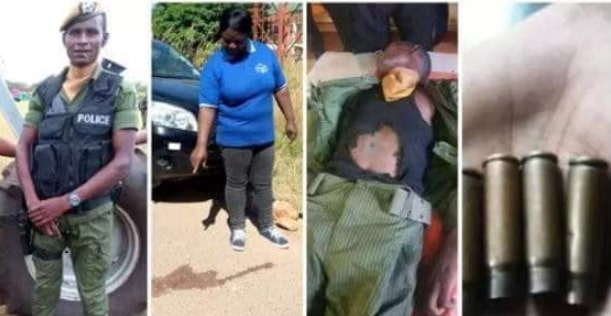 A law enforcement official has killed himself over betrayal by a woman he spent most of his life savings on.

The police officer shot himself with an AK47 rifle because he girlfriend cheated on him.

He also killed two people and wounded 2 others at a shooting incident in Lusaka’s Chainama area in Zambia.

The late officer identified as Constable Jackson Mwanza, purportedly sponsored his girlfriend identified as Christine Mulenga in school from grade 10 to college, according to a friend of the late police officer. His acts were reportedly influenced by “betrayal” from the girlfriend.

According to the friend, it was three weeks ago when they (him and his girlfriend) moved out from a rented property after Mwanza encountered financial challenges and failed to pay rent. Mwanza accumulated debts to sponsor his girlfriend Christine Mulenga. This is how he became financially crippled.

However, after Mwanza was chased from the house he was living in, he became homeless but was squatting with his colleagues. His girlfriend went to live with her friend who was shot on her arm. It is at the same house where Christine Mulenga allegedly began to cheat on Mwanza with a mechanic who was shot dead by the late officer. .

At Chainama College, Christine was said to be dating another student who was also stabbed in the head.

Currently, Christine Mulenga is in custody at Central Police where the police are questioning her about what transpired exactly.