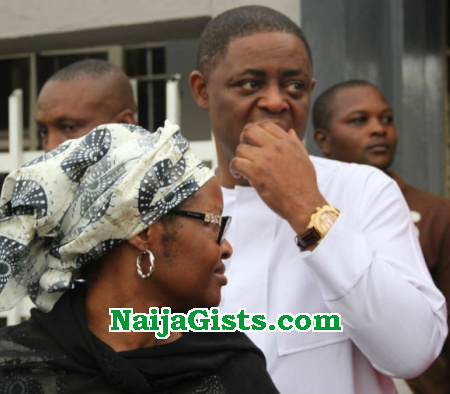 Two ex-ministers and directors of Media and Finance respectively of the People’s Democratic Party, PDP, Campaign Organisation in the 2015 general election, Femi Fani-Kayode and Nenadi Usman are to remain in prison till Monday July 4, 2016 as a Federal High Court sitting in Lagos on Friday reserved ruling on their bail applications.

Fani-Kayode and Usman alongside Danjuma Yusuf and Jointrust Dimensions Nigeria Limited were on June 28 arraigned by the Economic and Financial Crimes Commission before Justice M. S. Hassan on a 17-count charge bordering on conspiracy, stealing, corruption and making cash payments exceeding the amount authorized by law. The accused persons are alleged to have diverted about N4.9 billion belonging to the Federal Government of Nigeria for political and personal uses.

They had pleaded not guilty. Consequently, their counsel, Ferdinand Orbih, SAN, Ifedayo Adedipe (SAN) and S. I. Ameh (SAN) moved the motion for bail, having filed separate applications in which they prayed the court to release their clients on bail.

But the prosecuting counsel Rotimi Oyedepo said he needed time to respond to the applications. Justice Hassan consequently adjourned proceedings to July for hearing of the bail applications.

At the resumed hearing today, counsel to the defendants (Ferdinand Orbih, SAN, Ifedayo Adedipe (SAN) and C. I. Ndukwe) argued the applications.

Orbih (SAN) prayed the court to admit the first accused person to bail based on self recognition pending the hearing and determination of the charges preferred against her. He also prayed the court to grant her bail on very liberal terms. Adedipe (SAN), and Ndukwe aligned themselves with Orbih.

Prosecution counsel, Nkereuwem Mark Anana opposed the applications. However, he stated that where the court decides to exercise its discretion in favour of the defendants, it should impose conditions that will compel them to attend trial.