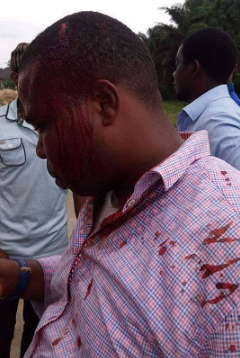 An unidentified policeman injured the man pictured above along Eket Ibeno road in Akwa Ibom state yesterday for refusing to yield to his bribe demand.

The suspect reportedly stopped the victim identified as Alex and demanded for his particulars which he handed to him.

After checking his particulars and realizing that everything was ok, he told Alex “you suppose know what to do nah!” but when Alex demanded for his car particulars, the officer out of anger used the butt of his gun to hit him on the head.

When he saw the victim covered in blood, the officer immediately alerted other officers on duty and they fled in their Patrol vehicle.