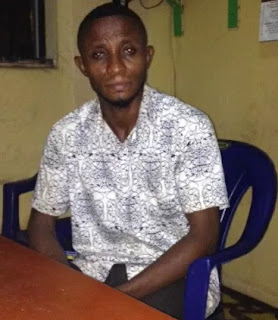 Meet Emmanuel Ezeugwu, a final year student of IMT (Institute Of Management and Technology) in Enugu who reportedly stabbed a prostitute to death.

According to police report, he reportedly stabbed the sex worker to death at his home and tried fleeing to Lagos when police caught up with him.

Here is how the police reported the murder;

To Ezeugwu Emmanuel, what he is in now, may not be what he actually bargained for. He is said to be final year student of the Institute of Management Technology (IMT) Enugu with Department of Public Administration.

He is also said to be living off camp at No 16 Onuato Ogui Enugu and a native of Ezimo in Udenu Local Government Area of Enugu state. On that fateful day of 22/10/17 at about 3am, story about love and conjugation turned sour following the situation that ensued which consequently brought about struggle between the now deceased and the accused person.

It was gathered that Ezeugwu Emmanuel had on 21/10/17 allegedly picked up a commercial sex worker at a red light located around Rangers Avenue Enugu probably to pass a night with and with a financial understanding of the sum of four thousand Naira for a day break show. 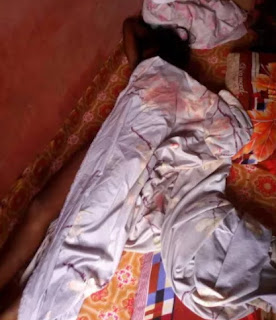 Ezeugwu disclosed that before then he has drank to his fill and they all went home and that on arrival and because it was already getting late, now demanded that they set into the business of the day.

According to Ezeugwu, his request/demand did not influence anything as the deceased allegedly requested to finish what she was inhaling in order to be in the business of the day mood.

The accused maintained that after several hours of his pressurizing her and without any answer, he slept off and woke up before 3am and immediately demanded that the accused person lives the room since the aim of bringing her appears to be counter productive.

At that juncture according to the accused person,the deceased resisted the move and allegedly warned the accused person to beware as she will not succumb to persons threat or whatsoever and later headed for a kitchen knife that was seen in the kitchen spot of ezeugwus room after allegedly biting the accused.

Ezeugwu further revealed that fight suddenly broke out between two of them and as the deceased tried to stab him to death with the kitchen knife, he overpowered the deceased and the kitchen knife went straight to the deceased stomach and finally he stabbed her on the neck region which sent her to the world beyond. He revealed that on noticing that the girl have giving up the ghost, decided to wrap and hide her in his room while thinking of what next to do.

Meanwhile, people living in the same compound with him suspected some issues going on and alerted members of the Neighbourhood watch group of the area who alerted the police promptly but before then,he has left the axis and on his way to lagos before he was promptly nabbed by the operatives of the command through intelligence information having been alerted.

His room were later searched and the dead body of the deceased seen and recovered and deposited at the mortuary of the Eastern Nigeria Medical Centre Enugu.

Ezeugwu is now regretting his actions and blaming the entire situation to drunkenness which allegedly led him into the situation. Investigations have commenced in full scale .