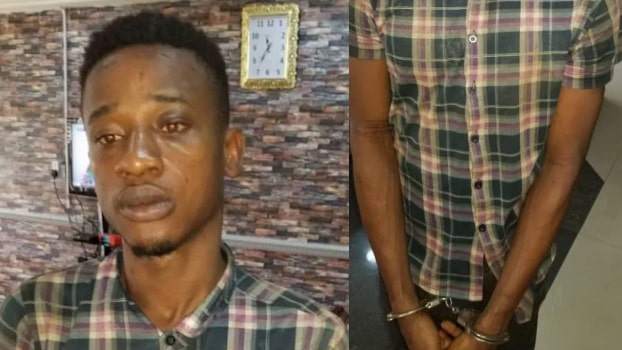 The Ogun state police command has arrested a man identified as Ebuka Everest for robbing and attacking his former employer, Mrs Nnamdi Theresa.

According to police, the 27-year-old suspect was arrested after a distress call received by policemen at Mowe division at about 4:30 pm, that armed robbers have invaded the house of one Mrs Theresa Nnamdi at Association Estate opposite Jehovah Witness Church in Mowe and held the occupants of the house hostage.

On receiving the distress call, the DPO Mowe division, SP Marvis Jayeola mobilized his anti-robbery team to the scene, they cordoned off the house and subsequently arrested Ebuka who had stabbed the woman on her right hand before tying her legs with rope, covering her mouth with a piece of cloth he tore from her bedsheet.

It was gathered that the suspect was a former employee at his victim’s fish farm before he was dismissed because of his questionable character.

According to reports, Ebuka had earlier visited the farm where he stabbed the farm manager several times before proceeding to Mrs Nnamdi’s residence to attack her and forcing her to transfer the sum of #40,000 to his account.

He equally ransacked the woman’s room and made away with her laptop, the sum of #5,000 cash, phones and other valuables before he was arrested by the police with the help of members of the public.

On interrogation, the suspect claimed to have worked with the victim for 4 months and that he lived with the family throughout the period.

He explained that problem started when he was duped of his four months’ salary by an online scammer who promised to help him travel abroad but ended up collecting his four months salary after which he was blocked from reaching his scammer online.

In order to get some money, he went to the farm, stole some items, but unfortunately, he was caught by the manager who in turn reported him to their boss and that cost him his job.

Out of annoyance, he (the suspect) proceeded to attack the farm manager before coming for the madam.

Items recovered from him included: knife, broken bottle, the rope he used to tie the victim legs, phones, laptop and other items he stole from the house.