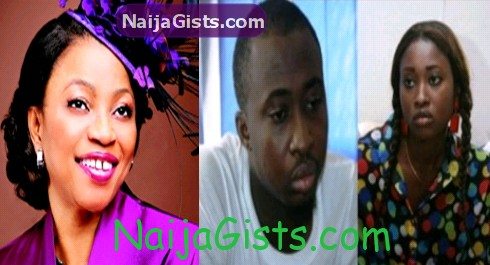 Nigeria’s anti corruption agency, the Economic and Financial Crimes Commission, EFCC has arrested an aide of the richest black woman in the world, a Nigerian oil billionaire by the name of Folorunsho Alakija over 3 million naira theft. naijagists.com

Below is a detail press release from the EFCC.

An aide of Mrs Folorunsho Alakija, Chief Executive Officer, The Rose of Sharon, a Non-Governmental Organization, Mr Vincent Ayewah and six others have been arrested by the Economic and Financial Crimes Commission, EFCC, in a case of abuse of office, conspiracy, forgery, impersonation and theft of N3million (Three million naira only).

Their arrest was the sequel to a petition by Alakija, alleging that Vincent, one of her employees fraudulently misappropriated the funds meant for the beneficiaries of the foundation’s empowerment scheme. She alleged that he impersonated and stole various cheques and withdrew monies meant for orphans and widows in care of the Foundation.

Vincent allegedly forged cheques of the Foundation’s Stanbic IBTC Bank Account and got one Miss Florence Ayewah and their friends to cash the forged cheques by presenting them with fake identity cards.

In the course of investigation, it was discovered that Vincent used his position to enlist his family members as beneficiaries of the scheme. Specifically, the Foundation had been able to prove his mother who is a widow in a petty trade and was paying the school fees of his sister, Florence Ayewah who is a student of Lagos City Polytechnic.

Vincent confessed that he fell for the scam due to his poor upbringing and being the only bread winner of his family. He admitted that when cheques are ready for some beneficiaries of the Foundation, “I divert them and get my siblings and friends to cash at banks, I also arrange ID cards bearing the name on cheques with their faces on it for bank clearance”. Florence was arrested at a Stanbic IBTC bank in Lagos while trying to cash a forged Cheque number 03378 in the sum of N97, 000 in favour of one Ms Olubunmi Juliana Ishola

Besides Vincent, six other members of the syndicate involved in the scam and who have also been arrested are George Ehizibolo, Onwuwa David, Okonkwo Chikadibia, Emmanuel Ayewah, Florence Ayewah and Chinyere Awanah

Vincent admitted having at, various times, sent his younger sister, Florence and her friend Chinyere and his younger brother Emmanuel to banks with fake identity cards. He also admitted having acquired a Honda Accord car with registration number: UA 845 AAA from the proceeds of crime.

The suspects will be arraigned in court soon.