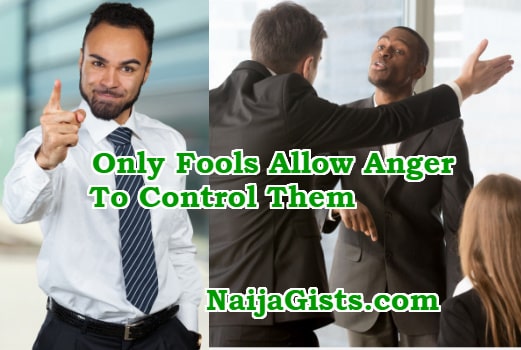 Never get angry if you are not a foolish person, why because, only fools get angry. Anger, which some see as weapon of expression against perceived life unpleasantness, is in reality, a poison that brings one greater unpleasantness.

If I am to give you only one advice, the advice would simply be that, ‘’no matter the provocation, getting enraged is not an option, actually it is the most foolish thing to do’’.

Anger has been eulogized beyond reasonability in human experience and as a result of this undue eulogy, people often praise themselves for their prowess in getting angry.

In Yoruba circle, temperamental people often say about themselves, ‘’mo man binu gan’’, which literally means someone self-claiming their ability to get angry seamlessly.

The mentality amongst many is that, certain life situations can only be confronted with anger and people who seamlessly get angry see it as a kind of tool to confront life unpleasantness, hence the self-glorification.

The real question is, if you are marginalized, oppressed, violated and betrayed by people, is it justifiable to get angry? I mean, is there ever a time that one should be in rage or to be enraged about the injustice of the world?

Sadhguru from India, a teacher of inner engineering explains that, you only think there is a reason for your anger, which is a wrong perception. Every wise person understands that anger is a foolish man’s way of responding to life issues.

If you look at it critically, people get terribly angry at home with their loved ones, i mean people they are living with, yet they bring a whole lot of violence, both physical and emotional violence within their homes. Usually, this happens when they are angry with somebody they are living with, somebody they love and care for. It doesn’t matter if it’s their friends, family, spouse or relatives; they still bring on the violence when they are angry.

But this is what you should know. When you are angry, every doctor knows this, that when you are angry, literally, you are generating poison within your own system, literally, that is exactly what you are doing. You are poisoning yourself. So, if you are poisoning yourself internally, simply because you want to react to external issues or behaviour of other people, don’t you think something is terribly wrong with you?

So, what happens if they are angry with people they don’t know, love or cared about? You can only imagine.

The point here is that, they may claim to have good reasons to be angry. Everybody always do. May be because she didn’t cook the food on time, or because he didn’t drop enough money for the family, or maybe she came back home late. Some people yell, break and scream at each other even on a date, when they are supposed to be having a good time. Angry people always have good reasons to be angry.

So, if you are poisoning yourself internally, simply because you want to react to external issues or behaviour of other people, don’t you think something is terribly wrong with you?

According to Sadhguru, the reason why anger has been eulogized is that, in a moment of rage or anger, some people who have been sleeping all their life propelled themselves into action and that action produced some results. Yes, that can happen.

You know, it may so happen that, if I throw a stone at you, instead of hitting you, the stone hits a mango on the mango tree behind you and a ripe mango fell into your hands.

But you know, that’s by accident.

Generally speaking, if I throw a stone at you, your head will crack. That is what is supposed to happen. Anger is a way of turning against yourself. Even though you might also hurt your opponent in the process, you will actually hurt yourself in greater proportion.

The legendary Nelson Mandela of South Africa had once said, hate is like poisoning yourself and hoping that your enemy dies. He went further to state that, ‘’nobody is born hating another person’’, and I say that, anger actually leads to hatred. You cannot hate what you are not angry against.

So, it is safe to conclude that, getting angry is like poisoning yourself and hoping that the other person gets paralyzed.

When you are angry, you yell and fume at other people, but if i ask you, do you enjoy being yelled and fumed at by somebody else? You know the answer will be in the negative.

Whether it is your parent, your husband, your wife, your boss or anybody, you don’t enjoy being yelled and fumed at.

So, if you do not enjoy it, what makes you feel like somebody else deserve it?

They endure you, they don’t enjoy you.

So, if I am to give you only one advice, the advice would simply be that, ‘’no matter the provocation, getting enraged is not an option, actually it is the most foolish thing to do’’.

Abdulrazaq Hamzat writes from Abuja, Nigeria. You can reach him at Discus4now@gmail.com

Continue Reading
You may also like...
Related Topics:anger, Control, fools, you

How To Become Smarter And Super Intelligent
How To Forgive Yourself For Cheating & Lying: Guide To Moving On After A Big Mistake