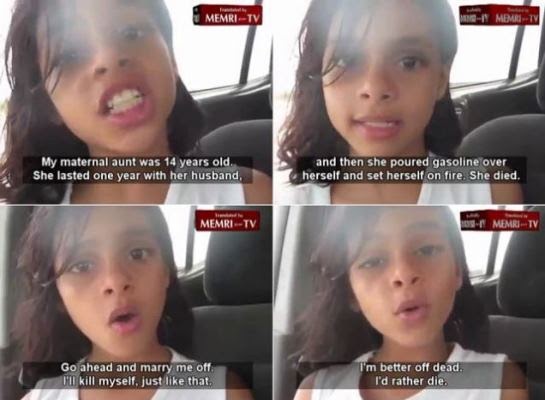 Her name is Nada Al-Ahdal, an 11-year-old girl from Yemen.

She recently ran away from her parents house over a plan to force her into an arranged marriage at such an early age.

“They told me that I am engaged, and that my fiancé had already paid them money and brought the engagement ring. They said that I couldn’t leave and even threatened to kill me if I went back to my uncle. I’m not an item for sale, I’m a human being and I would rather die than get married at this age. I’ve decided that I have two choices: to leave or to die. So I chose the first”

According to her, the only person that could rescue her in this situation is her maternal uncle who is against child bride.

Hear what her uncle said to reporters;

When I heard about the groom, I panicked. Nada was not even 11 years old; she was exactly 10 years and 3 months. I could not allow her to be married off and have her future destroyed, especially since her aunt was forced to marry at 13 and burnt herself. I did all I could to prevent that marriage. I called the groom and told him Nada was no good for him. I told him she did not wear the veil and he asked if things were going to remain like that. I said ‘yes, and I agree because she chose it. I also told him that she liked singing and asked if he would remain engaged to her.’

She now stays with her uncle who is anti-forced marriage.

This is as a result of the poverty level in the country.

Parents often give out their daughters to make a living.

What the video below