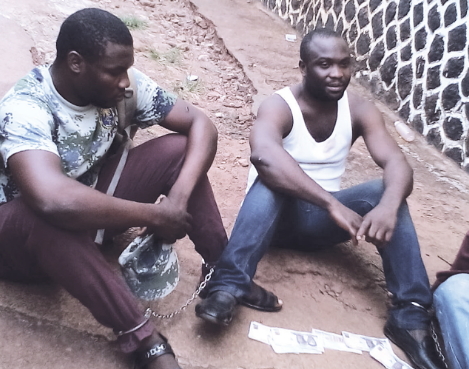 The officials of Enugu State Police Command today said they have arrested members of a notorious syndicate that specialized in job placement racketeering in Enugu.

The command’s Spokesman, Mr Ebere Amaraizu, told the News Agency of Nigeria (NAN) in Enugu that the syndicate members were rounded up through intelligence information.
Amaraizu said that the syndicate, which operated under the name “Step Golden Concept”, had been a thorn on the flesh of members of the public in Enugu and its environs.

He said that they were arrested on Wednesday at their hideout at 46 Chime Road, New Haven, Enugu.
“It was gathered that the suspects who usually act as job providers, use the platform to extort various sums of money from unsuspecting job seekers.

“They do this with a promise that job is real which will be false later, without the victim getting his money back or getting the job.
“The suspects usually contact their victims via random SMS sent to their phones calling for job interviews and how to make payment.

“Based on intelligence information, their hideouts were raided by the state command operatives where no fewer than 30 victims who were earlier extorted appeared for suspected pseudo-interviews.
“Suspects are now helping the operatives in their investigation in relation to the nefarious activities,’’ Amaraizu said.

The spokesman advised members of the public to be security conscious and avoid anything that would expose them to activities of fraudsters.

“The command has put adequate machinery in place to fish out those in this illicit act and bring them to book,’’ he said.