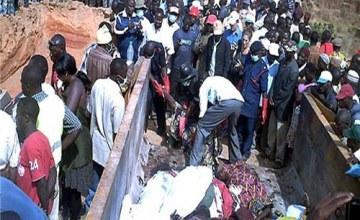 At least 33 people were feared killed in a fresh attack on Ligyabo village near Arikya in Lafia East Development Area of Nasarawa State at the week­end.

According to eyewitness account, the incident occurred at about 3 pm last Saturday, when the villagers, who were returning from farms, were at­tacked by gunmen suspected to be Fulani herdsmen, killing 33 people including women.

Speaking to reporters, one of the victims, who escaped from the attack, Habibu Mo­hammed, from Agbalagu vil­lage in the area, said: “We left our farms with three women and we heard a gunshot. We saw Fulani herdsmen by the road and they opened fire on us, killing all the people. In fact, I don’t know how I escaped.”

Also speaking, a female sur­vival, Saratu Mustapha, said she and her co-wife were riding home with their husband on his motorcycle when the gunmen killed her husband and her col­league.

Reacting to the attack, the District Head of Alizaga, Al­haji Sule Anda, called for the establishment of a police post and Army barracks in the area to curtail incessant killing of his people.

He called on Governor Tanko Al-makura to ensure the protection of lives and property in the community and end the current security challenges fac­ing the state.

Earlier, the member repre­senting Nasarawa Eggon East at the state Assembly, Ibrahim Muluku, blamed Governor Al-makura for not looking into the plight of his people.

Continue Reading
You may also like...
Related Topics:attack, Fulani, nasarawa