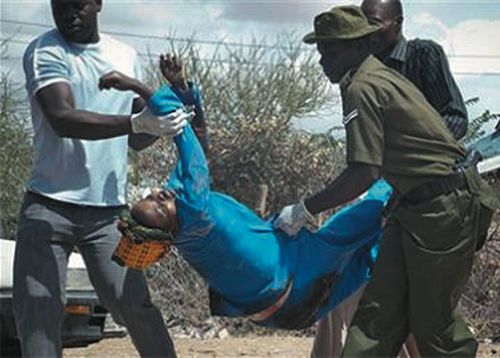 May 22, 2015 – Fulani Gunmen Killed 5 In Plateau; Terrorists Murdered 13 In Kyado Market Be Benue

As residents in most villages in Barkin Ladi Local Government  Area of Plateau State still live in  fear of attack by gunmen, fresh report has indicated that no fewer than six persons have been  killed in renewed raid on four communities in the area.

The fresh attacks were said to have taken place on Wednesday morning. The affected communities include  Jong, Lobirin, Rabuk, and Zim in Ropp / Fan districts.

Even though most of the settlements in the area have been deserted by the villagers, who left for safer pastures, some men braced up to keep vigil on their villages.

Daily Sun learnt that it was in the process of protecting the little possessions left behind by the villagers that they were gunned down by the Fulani herdsmen.

Police Public Relations Officer (PPRO), DSP Emmanuel Abu, who confirmed the killings said though no arrest has been made, the policemen were on the trail of the suspects.

He  said the Commissioner of Police, Nasiru Oki had ordered the redeployment of more men to the affected areas to curtail further attacks, urging the affected communities to remain calm.

In another development, gunmen on Wednesday killed 13 persons at a crowded village market in Ukum Local Government Area of Benue State.

The armed men stormed the Kyado market, a boundary town between Benue and Taraba states after they sighted their target around the area.

They stormed the market which is located close to Wukari in Taraba State at about 1pm in commando style and opened fire, randomly killing 13 and injuring several others in the process of getting their target.

Speaking to newsmen on the matter, the member representing the area in the House of Assembly, who is also the Majority Leader, Paul Biam, disclosed that 13 people were killed in the tragic incident.

Continue Reading
You may also like...
Related Topics:Fulani, Gunmen, plateau