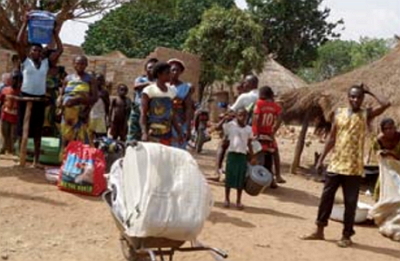 The assailants were said to have attacked, about 5 pm, on Tuesday, shooting sporadically at helpless villagers, who had sneaked to their deserted village to pick foodstuff after the last attack.

It was gathered that the victims, who were taking refuge at Kange, went to get foodstuff from their homes when the attackers emerged from the bush and opened fire on them.

A resident, Mr. Philip Dodo, who escaped, said three of his relatives were still missing. President of the Tiv Youth Organisation Comrade Peter Ahemba, who confirmed the incident, said it was unfortunate that a particular ethnic nationality could be targeted for extermination without hindrance.

He said the matter had been reported to the appropriate authorities.

“For us the indigenous Tiv people of Nasarawa state, we have no any other place to run to; that is why we continuously count on Governor Tanko Al-Makura for a solution to this unfortunate development.

“We appreciate efforts by the government and other stakeholders towards bringing lasting peace to our communities, but we can only stop crying to the authorities when a solution is finally found.”

Continue Reading
You may also like...
Related Topics:Fulani, herdsmen