Nigerian actress Funke Akindele might have secretly called it quit with her husband of less than one year.

The husband shared a sad news early this morning on his Facebook page that points to the fact that his relationship with the talented actress has ended.

Last year August, the actress married a popular Lagos-based businessman, Kehinde Oloyede aka Almaroof who is already married to another woman.

One month after their popular wedding, Funke’s husband impregnated another lady and that is how the problem in their relationship started.

Funke did all she could to hide the mess but it all came in the open. 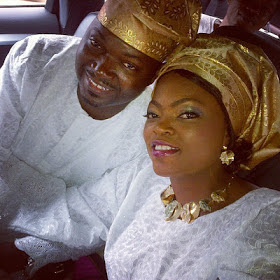 As we speak, the actress is yet to say anything in regards to this separation.

Hear what Funke Akindele’s husband said via his Facebook page few hours ago;

“It is with heavy heart that I am announcing the separation of me and my wife, Mrs. Olufunke Akindele. We have both agreed to go our separate ways because of irreconcilable differences. We are still best of friends and we would forever remain good friends. Am  doing just fine,gettn along without u,don’t need u anymore in ma life.u  d greatest mistake av made in recent time..Kehinde Oloyede.”

Though the message has been deleted from his timeline the fact still remains that they might have separated.

Let’s wait for the official confirmation from the actress in few hours time.

Controversy trails Funke Akindele’s inter-religious marriage after fans blast her for marrying a Muslim and a father of 5 kids.

Jenifa’s mother is a popular pastor at Mountain of Fire ministries.

Note: This story remains a rumour until there is an official confirmation from both parties.

Stay in touch with NaijaGists.com as this story unfolds.