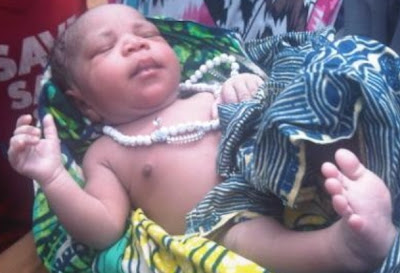 According to The Nation, thousands of people trooped to a private maternity home in Kotaworo area of Bida, in Niger state on Sunday to catch a glimpse of a baby girl said to have been delivered with a Muslim prayer Rosary (Tasabih) on her neck.

The middle aged mother of the baby, Adijat was said to have been rushed to a local midwife home near the residence of Pa Mohammed Bello Masaba, the Polygamist at about 2 pm on Sunday and after minutes of labour, she was delivered of the baby.

According the owner of the local maternity home, Alhaji Abubakar Baiwa Shasha who took delivery of the baby, “I was shocked when in the course of the delivery the baby came with a Chisbih on her neck. The baby was born with a black rosary at delivery point.”

“But I was surprised when after a while the rosary turned to white to the amazement of the few people around.”

As soon as the news spread round the town, thousands trooped to the the maternity home shouting “Allahu Akibar; Allahu Akibar (God is Great) as they scrambled to see and touch the baby. ”

Efforts to get the father of the baby, Isah, a native of Loma in Kwara State were fruitless as he refused to talk to our Correspondent.

An Islamic scholar, Malam Idiris Ndajiwo said the delivery of the baby with the mysterious rosary “showed the greatness of Allah. The delivery of the baby today, in this town and this area (Kutaworo) is a big thing to us Muslims. This actually goes to show that Allah is in control of what happens to any one and in the whole world.”

Another well wisher and the Personal Assistant to popular Islamic scholar, Pa Mohammed Bello Masaba, the octogenarian super polygamist, Alhaji Muktari Salau Bello said, “we have never witnessed such kind of miracle before in this town, but we thanked Allah for what He has done. In fact what happened is a miracle and we are very happy about it”.

The baby was later taken to the Etsu Nupe’s palace where they were received and blessed by the royal father , Alhaji Yahaya Abubukar.

Confirming the delivery of the mysterious girl when contacted on phone, the Emirate Secretary Alhaji Abdulmalik Usman said, “it is true. The baby was brought to the Palace and she was received and blessed by His royal highness, the Etsu Nupe and they have since left for their home. “

[Culled from The Nation]

A case like this is very common in a world of religious egotism.

Do you believe this?