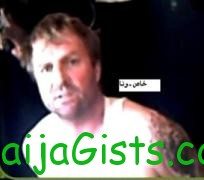 May 31, 2012 – German Man Kidnapped In Kano Dies During Rescue Operation

A German man named Raufach Edgar who was kidnapped on the 28th Of January, 2012 by some gunmen along Zaria-Kano Expressway has been killed by his captors. naijagists.com

We learnt Edgar died during a botched rescued operation by Joint Task Force.

Before his kidnap, Mr Edgar was working with Dantata & Sawoe Contruction firm located on the Zaria-Kano expressway