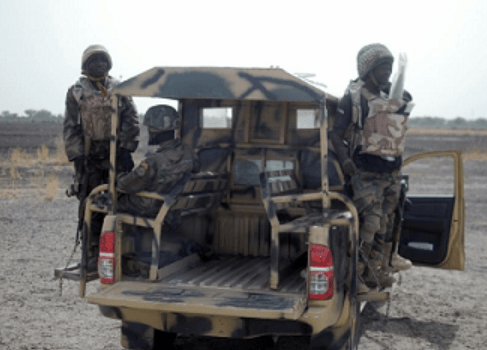 4 soldiers including an Army Captain have been killed by armed gunmen in an ambush in Sarkin Pawa in Munya local government area of Niger state.

Three other soldiers were injured in the ambush.

The deceased include a Captain who led the soldiers in the operation, a Staff Sergeant and two Corporals.

The soldiers were said to have responded to distress calls from Gwar community in Munya local government where the gunmen had invaded and were carrying out a house to house raid.

The soldiers, upon receiving the distress call, mobilized from their base in Zazzaga community and headed to Gwar community accompanied by some armed policemen in their armored vehicle.

It was learned that the gunmen had taken off when they sighted the soldiers but laid an ambush for the soldiers who had followed them into the bush.

The gunmen were said to have started firing immediately the soldiers entered into the bush where they had laid ambush killing the Captain on the spot.

The other three soldiers were killed during the gun battle between the soldiers and the gunmen which lasted for over an hour.

The gunmen burnt two Hilux vans of the soldiers and went away with the Soldiers Machine Gun (MG) riffle.

The Chairman of Munya local government, Alhaji Mohammed Garba Dazz confirmed the incident to newsmen saying the gunmen numbering 30 had invaded the village and held them hostage for hours before the soldiers came to their rescue.

“I personally provided logistics to the soldiers before they left for the operation, both the soldiers and the police were overpowered due to a large number of the gunmen.

“One hour after they left for the scene, they came back with bullets holes in their armored vehicle and the glass shattered.

“As I speak with you now, they have killed four soldiers and three others seriously injured. They have also burnt the Hilux Van of the soldiers.

“The bodies of the soldiers have been brought to the Sarkin Power police station and am just from there. That is all I can tell you for now”, he said.