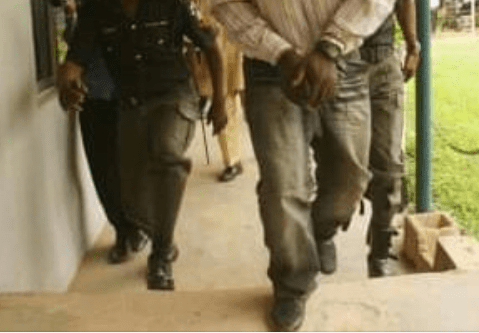 A police officer identified as Okon Essien who was recently arrested for killing a man has killed himself.

The Inspector allegedly killed himself around 1:30am Wednesday at the State Criminal Investigation and Intelligence (SCIID) in Lagos where he was being detained to avoid trial.

Essien was arrested on January 31 alongside three others- Inspectors Lawrence Adegboye, Olorunloju Olusegun and Sergeant Ovbioghi Joseph over the death of one Stanley Hassan.

Hassan was alleged to have been shot by Essien at the wee hours of January 31, when his team intercepted four suspects at Akodo, along Area 12, Offshore Oil Dangote Refinery Project, Akodo.

Others who were with Hassan were identified as Samson Ugonah, Omachi Godwin and Prosper Okoye.

According to police spokesman Bala Elkana, the Inspector and his team members were being investigated when he allegedly killed himself.

“While in custody, the Inspector, Okon Essien, allegedly killed himself. His corpse has been deposited at the mortuary for autopsy.

“The Commissioner of Police Lagos (CP Hakeem Odumosu has ordered an indepth investigation into the case. Investigation is ongoing.”